A Day in Her Apron 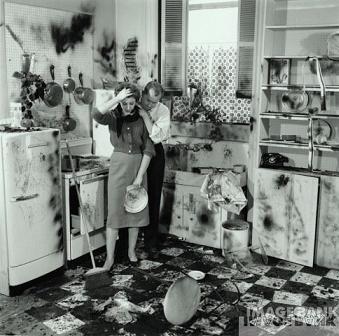 An Undead Horse Trope. Essentially for some reason the Housewife won't be available to do the housework, and the job falls to someone else (usually her hubby). Hilarity Ensues.

Usually an Aesop about how important and hard housework is and how men ought to be grateful for the work women do in the home.

There are several variations. A common one is for the husband to argue that he does the "real work" and that the wife just gets to be home all day. A challenge ensues to see if he can really handle it. Gilligan Cut: the house is in flames, babies are screaming, and the man is covered in... something icky. The newest wrinkle is to have it be a career woman who thinks that "homemaking" isn't really work. Of course she learns differently.

Other times the wife and husband switch jobs, to see whose is "easiest". In this variation the wife also soon finds that the husband's job isn't nearly as easy as she thought it'd be. A lesson is learned by both to appreciate more what the other does. (A common subversion of the dual lesson learned is for the wife to head home ready to admit she was wrong, only for the husband to declare his surrender the minute she walks in the door--she then swallows her apology and agrees that the husband has learned his lesson and she'll "let him off easy". Sometimes a Double Subversion follows.) Related to Feminine Women Can Cook.

Other times it's the opposite scenario: The moment every Genre Savvy husband dreads, his wife is leaving him. Well, not quite. Maybe she has a job, or maybe she's taking a much-needed vacation, but either way, that means he has to do.... (Scare Chord) the housework. Perhaps he will protest. Or maybe he promises his wife that he's glad to help her out and let her get a rest. His friends might make jokes about him being emasculated. But, eventually, he will accept his fate. After all, he wants to be a good husband. So, he kisses his wife goodbye, she leaves, and then he prepares himself for his duty.

Gilligan Cut to 10 minutes later. The floor is covered in garbage, there's stuff on the walls, the sinks/toilets/dishwasher/washing machine/all of the above are overflowing, and something is burning in the oven. In more outrageous shows, there might even be a wild animal in the house. The phone rings, it's the wife.

This might be followed by a desperate attempt by husband and children to fix everything before mother gets home.

A particularly interesting variation is when the homemaker is a background character (maybe a Team Mom) who we rarely see, and then she goes missing for some reason. It's almost like A Day in the Limelight—but caused by the character not being there like she usually is.

A subtrope of Men Can't Keep House and Vetinari Job Security. Contrast Just Fine Without You and House Husband. See also Doom It Yourself. Do not confuse with Gender Bender.

Examples of A Day in Her Apron include: