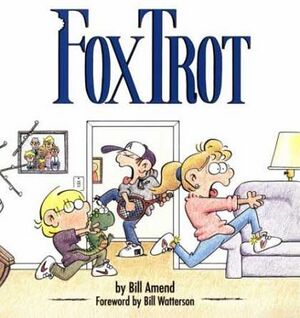 A comic strip that begun in 1988. It centers on the Fox family, a reasonably average 2.5-child household. Most of the humor comes from the characters or commentary on pop culture, occasionally both at once.

The characters are known for their quirkiness. Peter starves himself for three days before each Thanksgiving and is an overall Big Eater to the extreme. Paige has an imaginary boyfriend named Pierre who factors heavily into her dream life (the strips involving him usually repeat the phrase "Ooh, Pierre!" a lot and end with a panel outside the dream, where Paige is sleeping and Jason has Quincy (a pet lizard) pressed to her lips or the like). Jason plays Dungeons & Dragons with his Black Best Friend Marcus, but their battles are usually against fictitious versions of Paige. The (vegetarian) mom tries to sneak tofu into their diet on a regular basis (and doesn't like the thermostat set above freezing). The techno-fossil dad should never be allowed to plan vacations. Ever. And Jason occasionally draws a comic book called Slug-Man, whose nemesis is the evil Paige-o-Tron. Written and drawn by a genuine nerd, which makes for a lot of in-jokes with Jason's video games, comic books and general geekery.

At the end of 2006, the strip changed to be Sunday Strip-only.

FoxTrot is the Trope Namer for:
Tropes used in FoxTrot include:

Retrieved from "https://allthetropes.org/w/index.php?title=FoxTrot&oldid=1969303"
Categories:
Cookies help us deliver our services. By using our services, you agree to our use of cookies.