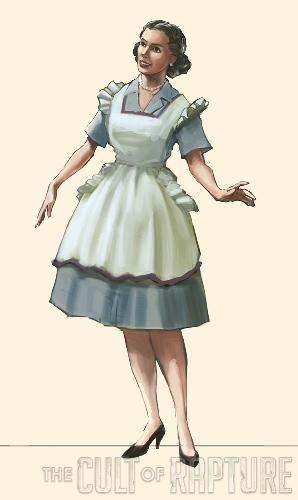 Housewife is a term used to describe a married woman who stays at home to personally raise her children and take care of their needs. This is the traditional role of women at least through the children's pre-kindergarten years. Homemaker is a mainly American gender-neutral synonym for a housewife or a House Husband. She's often a stock character in Dom Coms who can generally be identified by being in the kitchen and lovingly counseling her children because she is The Heart of the family. There will probably be reference to her doing laundry, grocery shopping, cooking, household cleaning, chauffeuring, managing the family finances and/or sewing. Her children and husband do like what she does.

If the Housewife takes pride in her appearance for the benefit of her family, she's also a Hot Mom. Compare Yamato Nadeshiko, a Japanese cultural ideal where a woman runs the household with a touch of iron as opposed to Extreme Doormat, which is culturally neutral and describes someone who lets everyone 'walk all over them'. Compare and contrast to House Husband, when a man takes the role of homemaker, much to the utter surprise of pretty much everyone in popular media. With a good man at her side she's far from a case of Meekness Is Weakness.

Examples of Housewife include: