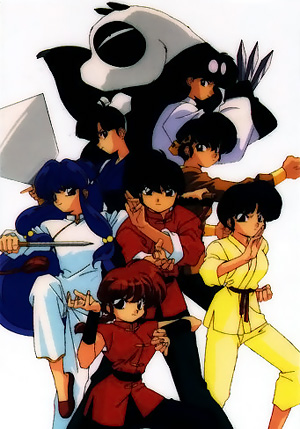 "Is that incredibly hot redhead the cool-looking pigtailed kung-fu guy's twin sister? Man, how am I supposed to date her?!" [1] On your marks! Get set... GO!

Ranma ½ is a long-running martial arts/comedy manga and anime series by Rumiko Takahashi. It has a lot of Urban Fantasy aspects and a generally light-hearted atmosphere.

It tells the story of Ranma Saotome, a teenage martial arts prodigy. Upon returning from a training journey with his father Genma, he finds himself engaged to marry Akane Tendō, another teenage martial artist prodigy and the daughter of Genma's best friend.

There's a small problem though: during their training journey, both Saotome men had an accident at a magical training ground in China called Jusenkyo, and now bear shapechanging curses. Whenever Genma and Ranma are splashed with cold water, they transform: Genma turns into a giant panda, and Ranma turns into a busty girl. Getting splashed with hot water restores them to their normal selves. Further complications arise in the form of other engagements arranged by Ranma's amoral father, boys pursuing the girls so engaged, and various other persons wanting to either kill or marry Ranma (in either—or both! -- of his forms). Several of these folks also bear Jusenkyo shapeshifting curses. Almost all of these people are world-class martial artists, which results in considerable property damage whenever a fight breaks out. Hilarity Ensues.

This is the series which brought the "Harem" trope to its ridiculous extreme: there's a reason that the Love Dodecahedron trope exists, and this series is that reason. The core cast numbered more than a dozen persons caught up in a complex web of love, hate, duty, honor and rivalry... and all of it was played for laughs. More characters joined the madness every year, making for one of the larger ensemble casts in anime and manga. Drawn by popular Mangaka Rumiko Takahashi, the manga ran in the Shounen Sunday magazine from 1987 to 1996 and was later collected into thirty-eight tankoban and shinsoban volumes (which were condensed to fit into thirty-six volumes for the American version).

The anime adaptation lasted seven seasons: it was supplemented by eleven OVAs, one theatrical short (released as the twelfth OVA outside Japan) and two motion pictures. Production ended when Kitty Studios folded in 1996. A belated thirteenth OVA was released in 2008 (along with special episodes of Inuyasha and Urusei Yatsura) as part of the Rumic World art exhibition that commemorated the 50th anniversary of Takahashi's publisher Shogakukan.

While the anime is considered a "classic", it suffers from several problems. It rapidly Overtook the Manga and was was canceled before it could complete the full storyline, ending three years before the manga itself concluded. The dearth of new material caused the show to become somewhat repetitious as the production team resorted to cookie-cutter Filler episodes that were unrelated to the original manga plot (of the final season's twenty-five episodes, only ten were based on the manga). This reflected a change in the manga itself, which had also abandoned an overarching plot in favor of smaller arcs and episodic comedy. The artistic quality of the show began to suffer noticeably early in its run (there is a visible decline in quality of animation, music and writing starting in the second season), but around the fourth or fifth season, this tendency had begun to reverse itself; the final seasons showed considerable improvement in the animation department, and the OVAs and movies are of superb quality.

Even with these problems, the Ranma ½ anime was quite popular in its day: a popularity that surprisingly carried over to North America. It was one of the first major crossover hits that helped usher in the explosion of anime importation in the early-to-mid-1990s. The dub by Viz Video is thought by some to be one of the first decent efforts in the history of English anime adaptation. Cultural translation, bowdlerization and localization were all minimized, in marked contrast to its near-contemporary Sailor Moon (most likely because it was released direct-to-video rather than syndicated broadcast). It was even briefly optioned for a live action Hollywood film in the late 1990s, although nothing ever came of it. It was also fortunate to arrive in the the English language market at about the same time that the internet emerged from academia into public life and rapidly acquired one of the first online fan communities (the Fan Fiction Mailing List or FFML was for many years predominantly Ranma despite the name) and perhaps the very first scanlation effort in the RanmaScan project.

Despite its age, Ranma ½ still has a remarkably large and vigorous North American fan community and is still responsible for a significant fraction of the anime fanfiction on the web, including a wide variety of crossovers. Ranma ½ is probably one of the most crossed-over series on the internet: on Fanfiction.net alone, it has nearly 2,200 crossovers listed as of 2021 (with hundreds, if not thousands, listed elsewhere, not even counting unlisted crossovers, either there or elsewhere). One sub-type of these crossovers—the Fuku Fic—is common enough that it has its own trope entry. The series' length and fanbase has predictably resulted in copious amounts of Fanon. It was even the main inspiration for the comic series Ninja High School, among many others.

On December 9, 2011, a two-hour live-action TV movie version aired on the Japanese network NTV. Based on an original story by Yoshihiro Izumi, it starred Kenta Kaku and Natsuna Watanabe as male and female Ranma, respectively, and Yui Aragaki as Akane, along with an impressive supporting cast. The official NTV site for this live-action special is here. Unfortunately, it was disappointing and subpar in the view of most fans, Japanese and American both.

Ranma ½ is the Trope Namer for:
Tropes used in Ranma ½ include:

Retrieved from "https://allthetropes.org/w/index.php?title=Ranma_½&oldid=1940673"
Categories:
Cookies help us deliver our services. By using our services, you agree to our use of cookies.