Everything About Fiction You Never Wanted to Know.
Jump to navigation Jump to search
/wiki/Robin Williamscreator 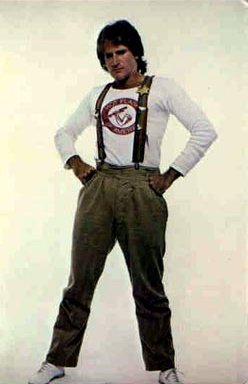 Although he studied drama at Julliard (where his roommate was the late Christopher "Superman" Reeve), Robin's preferred stage was to be found in standup comedy clubs. There he was discovered (several times) by TV producers and agents. Technically first appearing on TV in a failed revival of Rowan and Martin's Laugh-In and The Richard Pryor Show, Robin rose to fame as the zany alien star of Mork and Mindy. In that series, his comedic brilliance at improvisation was so irresistible, the writers decided to bank time in the scripts for Robin to cut loose. During this time he struggled through addictions to cocaine and alcohol, and made his first major movie, Popeye. The movie failed. (His first film was actually a sketch movie called Can I Do It Till I Need Glasses. His scenes were cut out after the film's first release but restored for rerelease just before Popeye came out.)

After Mork and Mindy was cancelled, Robin still struggled on the big screen, through The World According To Garp, Moscow on the Hudson, and the very poorly received Club Paradise. It wasn't until Good Morning Vietnam that people started taking this comic seriously, and he got his first Academy Award nomination for Best Actor. He was nominated again for Dead Poets Society two years later, and yet again for The Fisher King two years after that. He didn't win either time. He continued to churn out classic roles, like the Genie in Aladdin and the title role in Mrs. Doubtfire. In 1997 he finally won his rightfully-deserved Oscar for Good Will Hunting. After that, he went through a period of overly-maudlin films such as What Dreams May Come, Patch Adams, and Bicentennial Man.

When these films became critical failures (and even gave him a disturbingly sizable Hatedom), he went into another period in 2002, one no one would have expected: his dark period. Death to Smoochy, Insomnia, and One Hour Photo established that he wasn't always so cute and cuddly, and all but Smoochy got rave reviews. Although he returned to the stand-up stage that same year, he continued to make films of all sorts of genres. Dramas like House of D, comedies like RV, and animated family films like Happy Feet prove that this man can somehow still make terrible movies worse and good movies amazing.

His hobbies included bike riding, Warhammer 40,000, Getting Crap Past the Radar in television shows and family movies, and hanging a lampshade on just about everything in Real Life. Known to wear suspenders and loud Hawaiian shirts, but rarely both at the same time, although it has happened.

He was also a pop-culture geek. He named his daughter Zelda (and they made an ad out of it for the remake of Zelda: Ocarina Of Time 3DS and Skyward Sword). His favorite TV show of all time was Neon Genesis Evangelion. He played Dungeons & Dragons. He also went on record saying that if they ever made a Live Action Adaptation of Pokémon that he would want to play Professor Oak. Has mentioned playing a sniper in the Battlefield series of FPS and was picked to demo Spore.

Often dubbed by Koichi Yamadera for Japanese releases of his films.

Sadly, Mr. Williams was taken from us at the relatively early age of 63 when, after being diagnosed with Lewy Body Dementia, he committed suicide on August 11, 2014. He will be dearly missed.

Not to be confused with English singer-songwriter Robbie Williams or that chick who writes the computer books or the animator Richard Williams.

Note: Please refrain from adding tropes related to his death (such as Harsher in Hindsight, Funny Aneurysm Moment, and Tear Jerker) to every single work he appeared in. Not only is this against the general spirit and/or letter of these tropes, it comes off as a bit morbid. Most of these tropes should be reserved for roles where he specifically mentions or discusses suicide.

Robin Williams is the Trope Namer for:
Robin Williams provides examples of the following tropes:
Like any celebrity, Robin got parodied or caricatured a lot in popular media.:

Retrieved from "https://allthetropes.org/w/index.php?title=Robin_Williams&oldid=1950705"
Categories:
Cookies help us deliver our services. By using our services, you agree to our use of cookies.