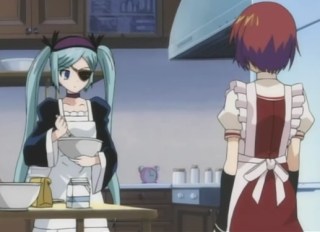 Eye on the prize!

By feminine we mean traditional domestically-focused wife-like roles. Being sexy isn't enough to qualify. You can also lose femininity by becoming overly childish and cute. We are talking a traditionalist grown woman femininity here, The Wife of The Three Faces of Eve. But how do you symbolize an internal trait like femininity? Easy! Use cooking ability as a substitute.

The use of cooking as a symbol of femininity goes back to Biblical times, but whether this trope affects any given instance depends on the time frame, the specific location, the family's class, and even the age of the woman. In Fairy Tales, ability to cook proved that you were a suitable bride for a prince—trumping even the trivial fact that you were, say, a frog. In 18th and 19th century England, for instance, cooking was a symbol of femininity only for women of the yeoman class (moderately prosperous countrymen), and even then women were only supposed to perform certain delicate duties that couldn't be trusted to servants - distilling herbs and preserving fruit, for instance. Poor women, on the other hand, were not considered to have femininity and were expected to cook for their families whether they wanted to or not, and upper-class women were warned to never set foot in their own kitchens lest the filth, heat, and stink of the room render them 'coarse'. Americans living in the same time frame usually lived in newer homes, so the idea of the kitchen being a place of filth suitable only for drunken cooks and coarse maids never existed. Even the wealthiest women who employed servants or slaves to do the cooking were expected to learn how to cook so they could run their homes more efficiently.

Keep in mind that this trope refers to home cooking, not professional cookery. (Although working in a restaurant may still be counted as one of the Acceptable Feminine Goals depending on how it's presented.) Younger tropers might be surprised to learn that before the 1980s, women were generally not allowed to work as professional chefs. The excuse usually given was that the work was "too physically hard" for women, but in reality the common belief was that although a woman could make an adequate home cook, she could never be a real chef, because being a chef took a certain genius that no woman could possibly ever, ever have. The resistance to women working as professional chefs was so strong that some women who tried ended up having to leave the profession to protect themselves from sexual harassment and violence. Thus Colette in Ratatouille can cook and be a fiery feminist heroine at the same time - as she points out, she has to be a fiery feminist in order to become a chef in that time frame at all.

The use of this symbolism can take many forms.

Feeding someone is a gesture of affection and generosity, in either a romantic or a maternal situation. She doesn't have to cook it herself, but it adds on when she does. (And bonus points if it's Your Favorite.) People may home in on her through Follow Your Nose.

In Hollywood, if you are a successful career woman or just a single gal who's making it in the big city somehow, the kitchen is a foreign country. The stove is used to store unused pots and if she can brew a pot of coffee she's lucky. She subsists on takeout, completely ignoring the fact that it's often cheaper to cook for herself.

In older works, a woman's inability to cook was meant to symbolize that by becoming so successful in a man's world, she lost some crucial part of her femininity. That particular bit of Values Dissonance is largely absent in newer works, but it makes the official love interest that much clearer: the heroine will inevitably end up with someone who can cook for her.

Often goes hand-in-hand with the woman being Maternally Challenged.

A less sexist version boils down to the image of successful person (i.e. wealthy and/so with a demanding career) having neither the time or inclination to cook when they can get some one else to do it.

Tomboys entertain a special place in perceptions of femininity. They counter their masculinity with a childish innocence, but avoid overly cute aspects that they may be less than comfortable with by acting boyish instead of girly. Everything put together hints that hidden underneath the tomboy Action Girl shell is a Proper Lady waiting to come out. And a Proper Lady Action Girl is hot! (See Lady of War.) Eventually, the tomboy may come to terms with that hidden femininity; until then, a severe lack of cooking skills signals that she still hasn't come in touch with her feminine side, even when she does want to.

In modern sitcoms it's part of a bigger discrediting of the more sexist characteristics of the 50's Sitcom Wife. The stereotypical '90s Sitcom wife is blunt, closer-to-Earth, Maternally Challenged, and Can't Cook, a complete subversion of the stereotypical '50s Sitcom Wife, who is endearing, motherly, always in the kitchen, and essentially seems to only be there to complement her equally stereotypical Sitcom Dad husband. The subversion works in some places but has eventually become a stereotype in itself.

Her hobby is homewrecking, and her attitude to home cooking is summed up in the words of a famous Wonderbra ad: "I can't cook. Who cares?" This might be interpreted as signaling that homewreckers violate the amity of women, and therefore has lost her femininity (which requires modesty and chaste behavior). However, it's more likely meant to reference the "madonna/whore complex", where men supposedly see women as either nurturing, wholesome homemakers who shouldn't care about sex or as passionate temptresses who shouldn't care about respectability.

Cooking as a symbol of femininity is not limited to simple absence. Often a woman who can't cook will go to great effort to improve her cooking skill. This symbolizes her search for femininity and can be a very common Very Special Episode for Tomboy heroines. (For comedy gold use a Lethal Chef and then Hilarity Ensues—sometimes this even becomes a Running Gag). If she succeeds it's major Character Development. (Particularly likely if she wants to invoke Through His Stomach and can't.)

Failure can sometimes lead to over the top Wangsting, which might be Lampshaded by a male friend pointing out that it's only cooking. This is will sometimes be followed by the woman lampshading this trope and explaining that being unable to cook symbolically makes her less of a woman.

It can also be used in a subversion to show that one of the above female stereotypes is actually feminine after all. A career woman shows up and cooks! Holy cow, you've found the mythical Snipe! Might be a Take That to stereotypes, or it might just be to show how awesome this character is.

Compare the male equivalent Manly Men Can Hunt for traditionally male activities in which modern successful men lose the ability to perform manly abilities as a function of their "sacrifices" for success. Fishing, car repair, hunting, plumbing, carpentry, etc.

Not to be confused Stay in the Kitchen which, despite its name, isn't exactly related to this trope, although they can overlap.

Examples of Feminine Women Can Cook include:

Retrieved from "https://allthetropes.org/w/index.php?title=Feminine_Women_Can_Cook&oldid=1919844"
Categories:
Cookies help us deliver our services. By using our services, you agree to our use of cookies.