Everything About Fiction You Never Wanted to Know.
(Redirected from Mork and Mindy)
Jump to navigation Jump to search 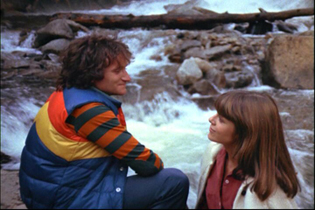 This Fantastic Comedy series on ABC, spun off from an episode of Happy Days, introduced the world to the comic genius of Robin Williams.

Williams played Mork, a visitor from the planet Ork. After his egg-like space vessel landed near Boulder, Colorado, Mork bonded with a pretty Earth woman named Mindy McConnell (Pam Dawber). After they became romatically involved late in the series, Mork and Mindy married, and Mork promptly laid an egg out of which was born their son Mearth (Jonathan Winters).

The supporting cast started off being mainly Mindy's father and grandmother, and in later seasons added a small circle of friends along with a curmudgeonly downstairs neighbor and a self-styled prophet named Exidor.

Every episode ended with Mork's report to Orson, the being who sent him to Earth, on Mork's latest lesson in Earth culture.

Tropes used in Mork & Mindy include:
Retrieved from "https://allthetropes.org/w/index.php?title=Mork_%26_Mindy&oldid=1928625"
Categories:
Cookies help us deliver our services. By using our services, you agree to our use of cookies.