A Hero to His Hometown 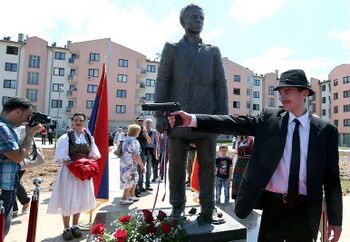 Not everyone laments the shots heard round the world

These guys are loved and celebrated by their people, whether they deserve to be or not, but have a hard time getting admiration from anyone else. It could be that the outside world simply does not know of their good deeds but more likely they did something to make the outside world very upset. Their comrades may not know the details, they may not care about what makes other people angry or they may not believe the accusations of the outsiders. Another case is that people are not impressed with a so called hero, seeing him as a big fish in a small pond. Whatever reasons these heroes be unheard of, hated or disrespected they can rest assured knowing they are heroes to their hometowns.

Related To Realpolitik, compare also: Values Dissonance, Your Terrorists Are Our Freedom Fighters, Villain with Good Publicity, Hero with Bad Publicity. Contrast:Never Accepted in His Hometown, No Hero to His Valet, 100% Heroism Rating. Despite the name it has little to do with Hometown Hero, which is a story about someone from the area it is told in.

Examples of A Hero to His Hometown include:

Retrieved from "https://allthetropes.org/w/index.php?title=A_Hero_to_His_Hometown&oldid=1756712"
Categories:
Cookies help us deliver our services. By using our services, you agree to our use of cookies.