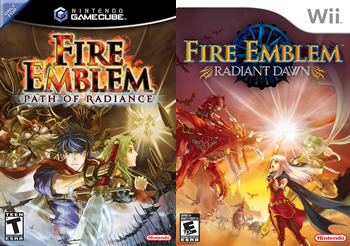 The ninth and tenth games in the Fire Emblem series, comprising its fifth canon and timeline. The Tellius games were the first international releases to appear on a home console, and are something of a return to the style of the last console games by way of implementing many features not seen since the Jugdral games and their darker art styles and plotting.

Tropes used in Fire Emblem Tellius include:
Retrieved from "https://allthetropes.org/w/index.php?title=Fire_Emblem_Tellius&oldid=1871028"
Categories:
Cookies help us deliver our services. By using our services, you agree to our use of cookies.