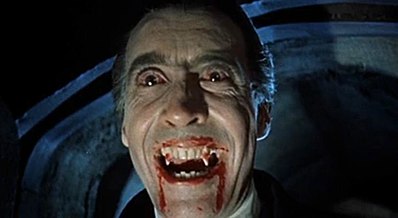 I vant to suck your blood.

The vampire. As Sherlock Holmes is to detectives and Superman is to superheroes, so Dracula is to vampires.

Bram Stoker was not the first to introduce vampires into western literature (see the "penny dreadful" -- emphasis on 'dreadful' -- novel Varney the Vampire for one precursor; also Carmilla, which introduces lesbian vampires; additionally The Vampyre, which Polidori wrote while hanging around with Mary Shelley and Lord Byron), but his Dracula is the first to enter popular culture -- the name known even by people not familiar with the book, or even the genre.

Stoker named the Count after the historical figure Vlad III Dracula, voïvode of Wallachia, who, despite being similarly bloodthirsty, was more prone to impaling his enemies than to biting their necks and drinking their blood. Indeed, in the novel, Van Helsing conjectures that the two were one and the same (There's also a popular theory that the name is derivative of "Droth Fhola" (pronounced Druh-Uhlla), the gaelic for "bad blood"), though Bram Stoker did not actually know a lot about the historical Dracula, beyond the name and a degree of the reputation, probably less than modern fans do.

Surprisingly, while German, Russian, Hungarian and Turkish literature and folklore all portray Dracul as a monster, he's considered a hero in Romania for his opposition to both Hungarian and Ottoman conquest, being voted among the 100 Greatest Romanians as recently as 2006. (Compare Richard the Lion Heart or Napoleon Bonaparte) People in Transylvania have been cashing in, as you can see if you watch Michael Palin's New Europe and a Dracula theme park was considered, then dropped.

The name, by the way, originates from the word "Dracul" (lit. "the Devil"), that originally stuck to Vlad the Impaler's father as a result of his association with the Order of the Dragon.

This page is about the character Dracula. For the novel by Bram Stoker, please see Dracula (novel).

Stoker invented some of the classic vampire traits, such as not having a reflection, and popularised others, but Dracula does not follow the standard rules, largely because he predates most of them. Sunlight does not do any harm to him (Though it does prevent him from shapeshifting, according to Van Helsing: "The sun that rose on our sorrow this morning guards us in its course. Until it sets tonight, that monster must retain whatever form he now has. He is confined within the limitations of his earthly envelope. He cannot melt into thin air nor disappear through cracks or chinks or crannies. If he goes through a doorway, he must open the door like a mortal."), and he is killed by having his head chopped off with a Kukri knife and a Bowie knife driven through the heart rather than a stake (not that a stake wouldn't have worked, as at least one of his victims-turned-vampire does receive this treatment, though the beheading is still required). He also starts as an old man and de-ages as he drinks blood, a tidbit kept in only by a few of the adaptations. None of them kept his abilities to slip through knife-edge cracks in masonry (unless you count the turning to mist, which may pop up occasionally, such as a power of Alucard, the son of Dracula) or turn into 'elemental dust in moonlight', however...

Most series with vampires will eventually include either Count Dracula or a subversion, sometimes using a transparent alias. ("Alucard", which despite sounding French is "Dracula" spelled backwards, is very common. It has been used in several movies, most famously by Lon Chaney Jr. in Son of Dracula.)

Despite being the archetype of all modern vampires, Dracula was remarkably angst-free in the original novel, and operated simply as a vicious, sadistic, and distinctly creepy archvillain (with a monobrow, rancid blood-breath and hair on his palms, no less) whose only redeeming quality was his Magnificent Bastardry (though there is some sympathy for Dracula the man, as opposed to Dracula the vampire, as it's established that the soul of a person who becomes a vampire is prevented from entering heaven until the vampire is destroyed, reflected by the look of peace Mina notices on him as he crumbles). He never even bothered to seduce any of his female victims, simply entering their rooms and attacking them or using hypnosis to draw them to him. Subsequent versions, naturally, have Flanderized his sex appeal and added oodles of gothy melodrama. He had some properly gothic angst, but it wasn't based on Mad Love or reluctant villainy--he was simply a very old, very tired Evil Overlord, bored with ruling a backwater area in Ruritania, who decided to Take Over the World or die trying, and would be happy with either outcome. The entry for this story is here.

Dracula may live in a Haunted Castle, or at least own one in the old country. Usually has three vampire women or more (likely past victims he turned) at his side as his minions.

He has also appeared in more films than any other character, fictional or otherwise, except for Sherlock Holmes -- including films where both appear together. Well, unless you count the Real Life Chinese-Warrior Wong Fei-Hung, who has 100 films (and counting) under his name.

Appearances of Dracula in fiction include:

Retrieved from "https://allthetropes.org/w/index.php?title=Dracula&oldid=1951853"
Categories:
Cookies help us deliver our services. By using our services, you agree to our use of cookies.