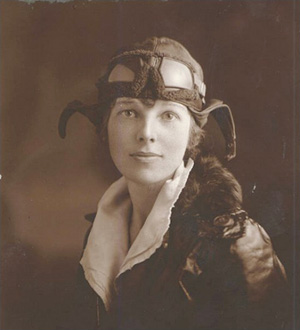 Amelia Earhart (born in 1897, disappeared in 1937, declared dead in absentia in 1939) was a famous aviation pioneer in an age when female pilots were extremely rare. She was decorated for her bravery and flying skill, and set many flying records of her time, both for women and for pilots of either sex. In 1932 she became the first woman to fly across the Atlantic Ocean solo.

Earhart is probably most famous today for her mysterious disappearance over the central Pacific Ocean on July 2, 1937, along with second navigator Fred Noonan, during an attempted circumnavigation of the globe. Although the most commonly accepted theory is that Earhart's plane either simply ran out of fuel and crashed into the ocean, or made an emergency landing on an uninhabited island, numerous conspiracy theories abound, everything from failed espionage attempts to secret identities to Alien Abduction. Recent archaeological excavations have most likely found her castaway site, but this will probably do nothing to halt the conspiracy theories.

Less well known is that Earhart was also a successful writer. She wrote many articles for Cosmopolitan magazine, and published two best-seller books on her experiences as a pilot and as a female pilot, 20 Hrs., 40 Min. and The Fun of It.

Works that portray Amelia Earhart in fiction include

Retrieved from "https://allthetropes.org/w/index.php?title=Amelia_Earhart&oldid=1692478"
Categories:
Cookies help us deliver our services. By using our services, you agree to our use of cookies.