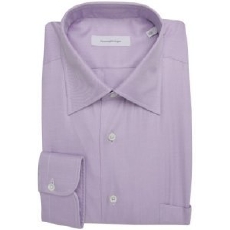 Take note, security officers: You can get these at Wal-Mart.

Nobody in their right mind wants to be a Red Shirt—it's a death sentence even the most Genre Blind can spot a mile away. It's been lampshaded to death and back, but it remains a very real trope with very real danger for the nameless fictional people under its thrall. So, if you're saddled with this Red Death what can you do? Change the color of your shirt!

In Star Trek: The Original Series, "Blue Shirts" were for science personnel and "Gold Shirts" were command staff; both had a much better life expectancy mostly due to rarely being sent away on team missions, the latter more so. The character is less vulnerable than a redshirt, but more so than blue.

Chromatic issues aside, the Mauve Shirt is a former Red Shirt who has managed to get enough screen time and lines to make him stand out from the rank and file, but not enough to be part of the main cast. It can also be accomplished by showing pictures of a spouse or baby (Be careful with that, as it's Tempting Fate all by itself), personal quirks, or just plain old giving them a name (whole or in part). The advantage to this is that they're less likely to be killed senselessly, because the audience cares for them and it would hit harder than some faceless redshirt no one cares about. The downside is that, since their death would now have more emotional impact, they are more likely to be Killed Off for Real to prove how bad the new villain is. If they're successful enough, they just might graduate from Mauve Shirt and become a "Gold Shirt" as part of the supporting cast or even the main cast.

Now this character can live, but aren't as likely to get Plot Armor as major characters. Also, shows where Anyone Can Die love to kill off these characters—we're getting to know this guy, he must be important, then boom! He's dead, and the status quo remains safely in power. (If a Mauve Shirt mentions taking the gang out for drinks, he'll be iced tout de suite.) See also Hero of Another Story for a character starting as a Mauve Shirt. Compare Ensemble Darkhorse.

For the villain equivalent, see Mook Promotion and Mook Lieutenant. For the in-universe version of people so competent and indestructible they're given a more important job, see Field Promotion.

Examples of Mauve Shirt include:

Retrieved from "https://allthetropes.org/w/index.php?title=Mauve_Shirt&oldid=1965985"
Categories:
Cookies help us deliver our services. By using our services, you agree to our use of cookies.