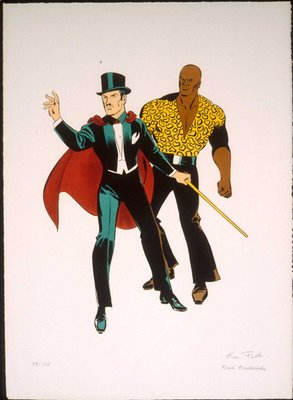 Lee Falk's (The Phantom) first comic series, Mandrake the Magician is his other contender for "first costumed superhero in the comics". It all depends on if you want to count a tuxedo, with top hat and cape no less, as a costume.[1]

Mandrake started publication in 1934, and continued until 2013. The first story The Cobra introduced Mandrake's bash brother, Lothar, an African prince who preferred fighting evil to his princely duties. Oh, yeah, Lothar is black. And perhaps the earliest black character portrayed seriously in comics. The second story The Hawk introduced Narda, who would become Mandrake's romantic interest. After sixty years they finally married in 1998.

Educated in the mysterious Collegium Magikos in the Himalayas, Mandrake's main ability is the power to create any illusion he can think of in a target's mind, just by "gesturing hypnotically." He also has some telepathic abilities. Naturally, his illusion-casting powers make him the world's greatest stage magician, and that is how he earns his living when he's not busy fighting the forces of evil.

Art on the series was done by Phil Davis, and later by Fred Fredericks. Following Lee Falk's death, Fredericks took over writing the series as well.

Tropes used in Mandrake the Magician include:
Retrieved from "https://allthetropes.org/w/index.php?title=Mandrake_the_Magician&oldid=1863455"
Categories:
Cookies help us deliver our services. By using our services, you agree to our use of cookies.