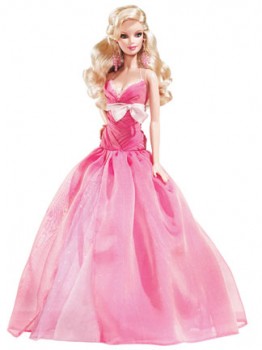 An iconic doll in her iconic pink.

A popular doll line that has been around since 1959, originally an offshoot of the earlier Bild Lilli fashion doll line which Mattel co-founder Ruth Handler came across in the mid-Fifties and eventually acquired the design and patent right in 1963. Partly a revolution in doll design, because until then most fashion dolls were made to look like little girls. Barbie was made to look like a young woman. When she was first created, her figure was more akin to a normal young woman's, but later adjustments made her dimensions were adjusted in different ways so that she would maintain a more natural figure under the thickly-hemmed clothes.

Barbie is also the subject of controversy, due to her figure being stylized and therefore impossible in Real Life, and thereby supposedly giving girls an "unrealistic" role model, though her figure was slightly modified in the late 1990s in response to these complaints. Mattel is careful to make sure Barbie's image remains "wholesome" and getting dolls into roles that were once seen as unsuitable for women. Mattel featured a NASA Astronaut Barbie just two years after Valentina Tereshkova (from the Soviet Union) became the first woman to go into space and Mattel has been releasing "Barbie for President" dolls since 1992.

The original storyline attached to the dolls was that of Barbie Roberts, a teenager and the oldest of many sisters, and her career as a model. Her surname and age have now been long since forgotten, and she generally plays adult characters, being showcased in various careers. Barbie has also been featured in a series of animated direct-to-video features since 2001 (each with a tie-in toy line), most of them based on Fairy Tales, but also including originals like the Fairytopia series. They tend to be accused of Tasting Like Diabetes, especially the newer ones, but have surprisingly strong, positive portrayals of women: i.e., the girls help each other without second intention and don't always bond only over guys.

Barbie has become a stock parody over the years; The Simpsons has Malibu Stacy (Lisa's frustration with a talking model that had the personality of The Ditz was the focus of a whole episode, inspired by a real controversy over a talking Barbie which could say "Math class is tough!"), and Rugrats had Angelica's favorite toy, the Cynthia doll. Then she's finally parodied herself in Toy Story 3.

There have been a number of movies starring Barbie, including:

She's currently[when?] starring in her own "reality" web show: Barbie: Life In The Dreamhouse.

The dolls who are usually seen in stores, this line has a few sub-categories:

The So In Style girls:

Barbie has a huge Periphery Demographic who are in it for the fashion and wit, so Mattel created this half of the Barbie line specifically for them. The dolls are usually not sold in stores (unless it's a store exclusive) but on the Barbie collector website. Sub-categories include:

The Dolls of the World line:

Tropes used in Barbie include: 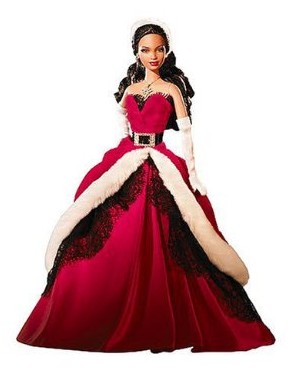 Represent, and accessorize.
Retrieved from "https://allthetropes.org/w/index.php?title=Barbie&oldid=1912019"
Categories:
Cookies help us deliver our services. By using our services, you agree to our use of cookies.