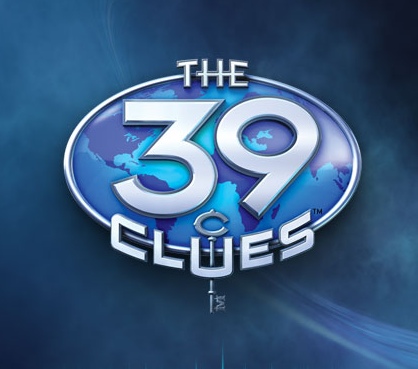 E. All of the above.

The answer is E.

The book series (and, by association, the website, cards, and sweepstakes) deals with the Cahill family, one of the most powerful families the world has ever known, as almost every historical figure from the last five hundred years is related to them. The family is divided into one of four branches - the Ekaterina, who are the geniuses and inventors of the world, the Tomas, who are explorers and athletes, the Lucians, who are the spies, generals, and leaders, and the Janus, the artists, musicians, and authors.

When Grace Cahill, arguably one of the last genuinely nice Cahills, dies, she chooses to unveil her alternate will and kickstart a globe-trotting quest to find the source of the family's power. Such power - a master serum that can give anyone who drinks it the inventiveness of an Ekat, the strength of a Tomas, the artistic genius of a Janus, and the strategic skills of a Lucian - can only be found by assembling all 39 Clues.

Our story begins when Amy and Dan Cahill, orphans who live with their disinterested great-aunt Beatrice, attend their grandmother Grace's funeral and the reading of her will. There, along with an assortment of...colorful...distant relatives, they make the choice: one million dollars or the chance to find the Clues alongside au pair Nellie Gomez. They choose to receive their first Clue, and are subsequently thrown into a five-hundred-year-old web of backstabbing, lies, and deceit. The first series follows them through the Clue hunt as they travel the globe, clash with their scheming relatives, and discover troubling truths about themselves and the Cahill family at large.

Flash forward two years to the beginning of the Sequel Series, Cahills vs. Vespers. The Clue hunt has ended with the victors, Amy and Dan, taking the recipe for the master serum but choosing not to recreate it, but a new threat has surfaced, and Grace revealed at the end of the first series that the Clue hunt was really only a practice run for this greater conflict between the Cahills and a rival group, the Vespers, who are allegedly so evil that they make Isabel Kabra look like Mother Teresa by comparison. Now the Vespers have begun making demands of the Cahill family, and the lives of seven hostages are at stake. Amy and Dan are once more sent on a trip around the world, frantically chasing down Vesper One's demands, while their teammates provide support from the Cahill Command Center, a computer lab that has been set up in Grace's mansion.

Here's a link to the the web site. Character sheet is here.

Tropes used in The 39 Clues include:

Warning: By definition, it is impossible to discuss a Sequel Series without spoiling the first series, so expect a lot of spoilers.

The Sequel Series, Cahills vs. Vespers