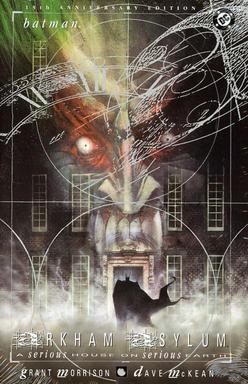 A 1989 Batman graphic novel written by Grant Morrison at his crackiest and beautifully (yet creepily) illustrated by Dave McKean.

Amadeus Arkham ended up living the remainder of his life in the asylum he founded, after losing a battle with his own private mental illness which started at childhood and was fueled by the murder of his wife and daughter. Many years later, the inmates have taken over (as opposed to just getting out like usual) and threaten to kill the staff unless Batman comes. As they plan to exact revenge, Batman runs into the depths of the asylum. What follows is a surrealist, heavily atmospheric sequence of symbols based on everything from The Bible and Egyptian mythology to Jungian and Freudian psychology.

More recent editions come with a full script, which is a huge help in understanding what the hell is going on.

Along with The Killing Joke, one of the main inspirations for Heath Ledger's interpretation of The Joker in The Dark Knight (well, maybe - Ledger himself said he was given it as research but found it utterly bamboozling). The video game Batman: Arkham Asylum also takes many cues from the graphic novel (along with Batman the Animated Series).

The title is taken from Philip Larkin's poem "Church Going".

Tropes used in Arkham Asylum: A Serious House on Serious Earth include:
Retrieved from "https://allthetropes.org/w/index.php?title=Arkham_Asylum:_A_Serious_House_on_Serious_Earth&oldid=1713723"
Categories: