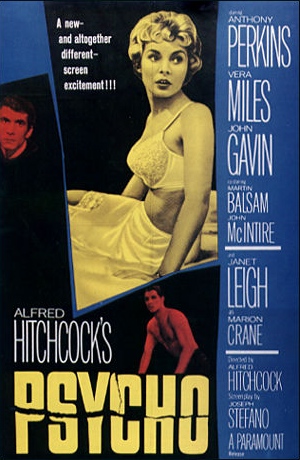 "It is absolutely required that you see Psycho from the very beginning!"

Psycho, directed by Alfred Hitchcock, was released in 1960, and is now one of the most famous thriller films of all time.

It has two big famous plot twists; at the time, Hitchcock went to great lengths to keep them secret (including an ad pleading "Don't give away the ending -- it's the only one we have"), but these days, most people know about both through Popcultural Osmosis even if they know nothing else about the film.

Psycho begins as a crime thriller: Marion Crane (Janet Leigh) steals a large amount of cash from her employer and sets out for California, where she plans to hook up with her lover and start a new life. She stops for the night at the out-of-the-way Bates Motel, run by Momma's Boy Norman Bates (Anthony Perkins), who lives with his domineering mother in a house behind the hotel.

Twist #1: As Marion has a shower in her hotel room, a dimly-glimpsed knife-wielding maniac suddenly appears and stabs her to death in the film's most famous and oft-parodied scene.

The rest of the film follows the investigation into Marion's disappearance, first by a detective hired to recover the money she stole, and then, after he also falls victim to the knife-wielding psycho, by Marion's lover and her sister. It appears that Norman's mother may be killing off any woman he shows an interest in (the local sheriff mentions two other unsolved disappearances of young women in the area). This leads into...

Twist #2: Norman's mother has been dead for years. Her domination is now entirely in his head, a split personality with the persona of his mother. It is Norman, under the influence of this personality, who has been committing the murders. Though the Mrs. Bates personality insists that Norman is the real killer because she can't move.

Being such a popular movie, it naturally spawned three sequels (one being made-for-TV) that few know exist. Despite Sequelitis naturally setting in, they received better reviews than expected:

There was also an unrelated 1987 TV movie, Bates Motel, involving a man who'd befriended Norman while being institutionalized with him, and on his release learns that the now-deceased Norman has willed the motel to him. A TV prequel series, also named Bates Motel, premiered in 2013.

In 1998, Gus Van Sant released an almost shot-by-shot remake starring Anne Heche and Vince Vaughn. To the extent that it was the same as the original, it was widely regarded as pointless, and to the extent that it was different, it was widely regarded as inferior (probably the most notable difference being a shot of Norman masturbating). But the fact that somebody thought it might be a good idea suggests what a big place the original film has in the public memory. Indeed, Van Sant may have been doing us a favor: in his own words, he did it "so no-one else would have to". Look at the trend of horror-film remakes that have been released during the Turn of the Millenium and The New Tens (The Amityville Horror, The Texas Chainsaw Massacre, Halloween, The Hitcher, Friday the 13th, and even a new version of Hitchcock's own The Birds came close to getting made at one point), and you'll notice he was ahead of the game in preventing Platinum Dunes from touching this one.

The shower scene is now part of movie culture, and the music used, along with the film itself, is used in many scholarly courses as prime examples of their chosen subject.

Psycho is the Trope Namer for:
Tropes used in Psycho include:
Retrieved from "https://allthetropes.org/w/index.php?title=Psycho&oldid=1921900"
Categories:
Cookies help us deliver our services. By using our services, you agree to our use of cookies.