Too Kinky to Torture 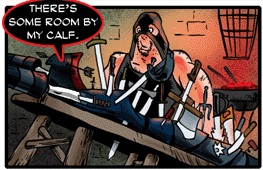 The best way to survive, nay, thrive during torture is to get off on it. (That goes for the victim, not the audience.)

Whether it's masochism, an iron body or mind, nothing is more demoralizing to a torturer than his victim giving him tips, or worse, berating him on a sloppy job!

Even bluffing enjoyment can work wonders when under torture, and we mean the good stuff, not just talkies.

If one really wants to take it Up to Eleven, remember, it's a Good Thing You Can Heal. One way to bypass this resistance to torture is use Forced to Watch.

A form of Attack Backfire.

No real life examples, please; This is All The Tropes, not Tropes After Dark. Also, we have no desire to Squick our readers who aren't interested in this sort of activity.

Examples of Too Kinky to Torture include:

Retrieved from "https://allthetropes.org/w/index.php?title=Too_Kinky_to_Torture&oldid=1896845"
Categories:
Cookies help us deliver our services. By using our services, you agree to our use of cookies.