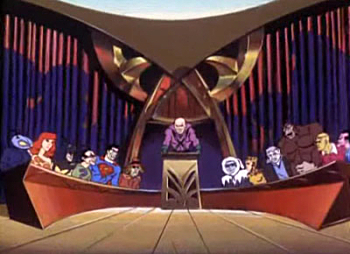 Plot of an episode or Story Arc, wherein one or more villainous characters—usually made up of some combination of past one-shots, members of the Rogues Gallery, and/or a few possible newcomers—join forces to destroy their common enemies, the protagonists.

Usually, they will initially overpower the heroes, but their own evil selfishness and inability to trust each other undermines their unified front, and the heroes strike at this weakness. Or one dominant personality double-crosses the others. Either way, the team dissolves at the end.

Often saved for a season or series finale. Crossovers do this a lot, using one villain from each series.

Named after the nemesis organization to the Superfriends, who actually managed to stay together, mostly due to relentless use of a Deus Ex Machina Reset Button to escape in the last scene, usually because their Hall of Doom can fly or burrow anywhere.

Likely to be a Big Bad Duumvirate as well. Evil Is One Big Happy Family is usually involved. For one-shot team ups that are usually on a smaller scale, see Villain Team-Up.

Examples of Legion of Doom include:

Retrieved from "https://allthetropes.org/w/index.php?title=Legion_of_Doom&oldid=1735786"
Categories:
Cookies help us deliver our services. By using our services, you agree to our use of cookies.