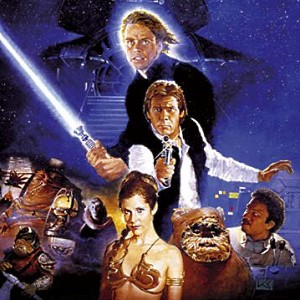 Completing the larger film Lucas planned, this film closed the door on the Star Wars film series until The Phantom Menace. Lucas still didn't direct, but did involve himself closer in the production this time.

The success of the first two films made the success of this one less of a worry. In fact, keeping the budget under control was one of the biggest issues. It turned out that locations were overcharging the production of The Empire Strikes Back, knowing it was the next Star Wars film. So the crew pretended to pitch the film to locations as a B horror movie, "Blue Harvest".

Other problems were creative. Lawrence Kasdan wanted a darker ending. Harrison Ford wanted Han to have a Heroic Sacrifice (although that might have rendered the entire arc in Jabba's palace meaningless).

After the film came out, critics were not as kind to the film's focus on more action than character, and many fans hated the Ewoks. The film was still a big hit and seen as a fitting conclusion to the saga. If nothing else, it ended the series with a lot of Spectacle.

Return of the Jedi was added to the National Film Registry in 2021, completing the original trilogy's presence in that collection.

The Expanded Universe clarifies that he fought his way out of the Sarlacc with his various weapons.

Retrieved from "https://allthetropes.org/w/index.php?title=Return_of_the_Jedi&oldid=1946717"
Categories:
Cookies help us deliver our services. By using our services, you agree to our use of cookies.