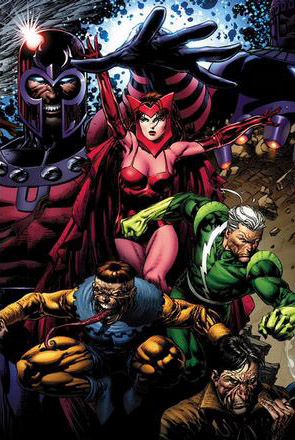 Heroes aren't the only ones who enjoy bonding in groups of five. Villains do it, too, and this Trope is the Evil Counterpart of the Five-Man Band. This isn't necessarily done to mirror the heroes or provide any sort of advantage; in fact, many Five-Bad Bands are in place even before the Five-Man Band is. Note also that Five-Bad Bands are more fluid than Five-Person Bands, open to more roster changes, and there may not even be five of them, though there are never fewer than four.

The roles in a Five-Bad Band are:

Also frequent is for the group to get a Sixth Ranger of its own—possibly a Sixth Ranger Traitor. Sometimes there'll even be a more classical Lancer. Just like with the Five-Man Band, the former can either be a Face Heel Turn or just simply a third entity that eventually joins them and the latter is a member that undergoes a Heel Face Turn (although the member doesn't necessarily have to join the heroes opposing the organization). It's extraordinarily rare for a Five-Bad Band to get a Team Pet, though. However, when they do, it will be out on the field of battle trying to ream redshirts of the team to death or is seen consuming Mooks like treats.

In general this team is the ultimate enemy to defeat, being equal and opposite their enemies. However, if they are a group sent out by the Big Bad and have a leadership structure but are nothing more then a dangerous group to cause trouble then it is a Quirky Miniboss Squad. A Five Bad Team can double as The Psycho Rangers, the collective Evil Twin of a Five-Man Band.

When adding entries to this list, please follow the order as listed above. Also remember, the individual character tropes are very specific character types. It is tempting to match one or two possible characters and then shove other characters in a Quirky Miniboss Squad to fit this Trope. Like the Five-Man Band, they have a team dynamic, not just vague personality quirks.

Similarly, neither all evil Five-Person Bands nor all groups of The Psycho Rangers are necessarily Five Bad Bands. Compare and contrast with a Standard Evil Empire Hierarchy.

No real life examples, please; As it turns out, there were very few five-member bands of criminals in history, and six- or seven-member examples were being added instead, and that is not this trope.

Examples of Five-Bad Band are listed on these subpages:
Retrieved from "https://allthetropes.org/w/index.php?title=Five-Bad_Band&oldid=1933944"
Categories:
Cookies help us deliver our services. By using our services, you agree to our use of cookies.