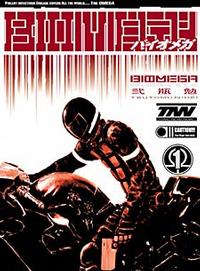 Biomega is a 2007 Cyberpunk Science Fiction manga by Tsutomu Nihei.

Twenty Minutes Into the Future, Zouichi and an AI integrated into his motorcycle called Fuyu are sent to retrieve humans for Toha Heavy Industries. They are looking for humans immune to N5S infection, which turns humans into undead disfigured "Drones". Zouichi is sent to find Yion Green, an immortal 17-year-old girl. The world's future is up to Zouichi when Yion is kidnapped.

Tropes used in Biomega include:
Retrieved from "https://allthetropes.org/w/index.php?title=Biomega&oldid=1911451"
Categories:
Cookies help us deliver our services. By using our services, you agree to our use of cookies.