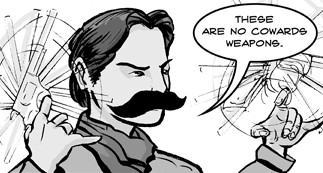 The hero that Guns and Gunplay Tropes are for.

It should be noted that for a while, guns and bullets were considered vulgar. Point, fire, they drop dead. This is so mundane that monsters and heroes who were cool enough became Immune to Bullets. After all, if it were that easy, the police would be able to deal with it.

However, certain genres have put the "cool" back into guns. It's all about style, so expect a lot of flourishes that wouldn't work in real life, such as using Guns Akimbo.

The Gunslinger is this hero. He or she[1] may be from The Western, Film Noir, Heroic Bloodshed or just plain scenery destroying action flicks. A wandering gunslinger is often The Drifter, one specifically out to do good is also the Knight Errant.

The Gunslinger comes in a few styles:

The Young Gun is a Gunslinger in infancy. You get double bonus points if your gunslinger is a girl. Also expect Marked Bullets to be used. Particularly skilled gunslingers may name their weapons -- whatever that implies.

For the eponymous Stephen King hero who epitomizes the trope, see The Dark Tower. Also has nothing to do with mechanical arms.

Examples of The Gunslinger include: