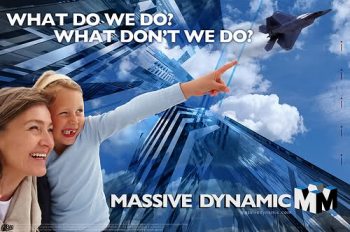 Speculative fiction, especially Dystopian and Cyberpunk fiction, tends to lean toward massive corporations. These corporations are usually umbrella corporations, controlling dozens of smaller companies that manufacture everything from clothing to military hardware. They can even be the police.

Perhaps there is one company that is a Privately-Owned Society in its own right. This goes beyond the definition of "monopoly."

Rarely are Mega Corporations portrayed with anything other than unremitting negativism; rather than being a simple business making things that people want to buy, they are almost invariably the villains of the setting, and depicted as exploitative, oppressive and screwing the rules with their money while maintaining a Peace and Love Incorporated facade. They are home to the Corrupt Corporate Executive, Bad Boss, Pointy-Haired Boss, and Obstructive Bureaucrat, and usually have Amoral Attorneys on the payroll.

Mega Corporations are shown as being private institutions and therefore doesn't have to play by most rules the government has to, such as freedom of speech, because it's always "nobody is forcing you to work for them or buy from them or use their institutions or buy their products." However, more darker versions will also show these guys pretty much buying off or eliminating their competitors, brainwashing the masses, and coming up with Evil Plans to ensure they have a monopoly and making it so that you still have to buy their products, while their employees are sometimes portrayed as oppressed, paid pitifully low wages (if at all), and treated as expendable. Dictatorships inside democracies.

They may also be shown controlling the government either through having employees in important positions or through lobbying, or taken to its extreme, may have Private Military Contractors or other Hired Guns (or even an entire country or world) at their disposal, and become Superpowers in their own right.

A more benign version may be owned by a Rich Idiot With No Day Job. However, in Post Cyber Punk stories, some Mega Corps can aspire to be Big Good , providing the hero with amazing equipment in their quest to literally snuff out the competition. There do exist some rare benevolent portrayals of a Mega Corp; in which they merely may just be a large business who employs a lot of people but isn't shown practicing in unethical trade practices.

Monopolies, Duopolies and Oligopolies (market structures which usually are home to several Mega Corp entities) do exist in real life, and indeed, very large multinational corporations do exist. And yes, some of these corporations do engage in unethical practices or political influence. Of course, it is an exaggeration (at least) to claim all corporations act in this way.

Examples of Mega Corp include:

Retrieved from "https://allthetropes.org/w/index.php?title=Mega_Corp&oldid=1964410"
Categories:
Cookies help us deliver our services. By using our services, you agree to our use of cookies.