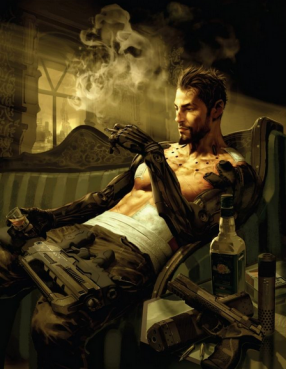 Cyberpunk is a Speculative Fiction genre centered around the transformative effects of advanced science, information technology, computers and networks ("cyber") coupled with a breakdown or radical change in the social order ("punk"). A genre that is dark and cynical in tone, it borrows elements from Film Noir, hard-boiled Detective Fiction and Post Modern Deconstruction to describe the Dystopian side of an electronic society.

The plot will more than likely take place Twenty Minutes Into the Future in some City Noir, Industrial Ghetto or Crapsack World that tends to be marked by crime, cultural nihilism and bad weather, where we use cutting-edge tech less for making a shining utopia and more for the sake of selfish profit and pleasure. Heroes are often computer hackers or rebellious antiheroes, while major villains are almost inevitably multinational conglomerates or Police States (or both).

If the work dates from the 1980s, there's a good chance that there will be a theme of Japanese economic dominance, with the evil corporations being sinister zaibatsu (possibly masterminded behind the scenes by Yakuza) and Japanese-sounding brand-names liberally scattered around. Many Anime have at least a hint, perhaps due to the fact that Japan is closer to actually being cyberpunk, with many relevant animators being critical of Japanese consumer culture.

Expect the philosophy of Transhumanism to be a feature, what with Artificial Limbs and cable jacks in the skull that lead to artificial realities. Artificial intelligences, Artificial Humans and insane cyborgs roam the earth, Philosophical and existentialist questions on transhumanist possibilities like "what is identity" and "What Measure Is a Non-Human?" are explored, and Everything Is Online.

The genre's vision of a troubled future is often called the antithesis of the generally utopian visions of the future popular in the 1940s and 1950s, but keep in mind that it is not a term that should be applied to every Speculative Fiction dystopia or Bad Future ever in the history of the genre, and does not need to always have an Anvilicious Science Is Bad message to it.

See Cyberpunk Tropes and Write a Cyber Punk Story for Cyberpunk's characteristic tropes and what sets it apart from other dystopias. The Other Wiki has an article and analysis on the subject. The story may fall on the Romanticism end of the Romanticism Versus Enlightenment scale.

There is some debate as to whether cyberpunk constitutes a Subculture or not, but whatever you do don't mix it up with cybergoth when speaking with those who identify as cyberpunks.

Examples of Cyberpunk include:

Also, assassinations are regularly ordered by the Prime Minister or other government officials (which the author of the original manga, Shirow Masamune, said meant that there had been a massive failure in the political process).

Retrieved from "https://allthetropes.org/w/index.php?title=Cyberpunk&oldid=1837745"
Categories:
Cookies help us deliver our services. By using our services, you agree to our use of cookies.