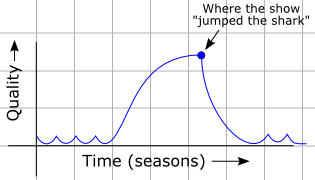 Jumping the Shark is the moment when an established show changes in a significant manner in an attempt to stay fresh. Ironically, that moment makes the viewers realize that the show has finally run out of ideas. It has reached its peak, it will never be the same again, and from now on it's all downhill.

This expression was coined after the episode of Happy Days in which Fonzie, dressed in his trademark leather jacket, literally jumps over a shark on water-skis during an episode shot on location.

JumpTheShark.com used to be run by writer Jon Hein (who now works as part of The Howard Stern Show), who coined the term with his friends in the mid-1980's. Maintained an ongoing list of series killing moments (granted, you could vote for every cause, and shows commonly had "Day One" as an option). The website lists actor Ted McGinley as their "patron saint", for he has the most television roles in which series slowly died off after his first appearance. The longest-lasting show with Ted in a starring role was Married... with Children, where he went for seven seasons after replacing David Garrison (Steve Rhoades). Ironically, the site itself jumped the shark in January 2009, when it was merged into the TV Guide website, had its content removed along with the voting system, and became a blog by writer Erin Fox. BoneTheFish.com is one website that billed itself as a successor to the "old" JumpTheShark.com, but it didn't last long, either.

There is some evidence that jumping the shark has no real effect on a show's success. This depends on one's definition: a strict shark-jump by definition sets the tone that eventually causes viewers to stop watching, or the softer definition used in the article walks the line between this trope and Ruined FOREVER. Take the Trope Namer, Happy Days: the moment happened in season 5, viewers stuck around for one more season, then got sick of the show's new tone (which, in hindsight, started with Fonzie jumping the shark) and left. In the original case, the moment was less "Ruined FOREVER" and more "I hope they don't do more of that" (which they did).

Retrieved from "https://allthetropes.org/w/index.php?title=Jumping_the_Shark&oldid=1970361"
Categories:
Cookies help us deliver our services. By using our services, you agree to our use of cookies.