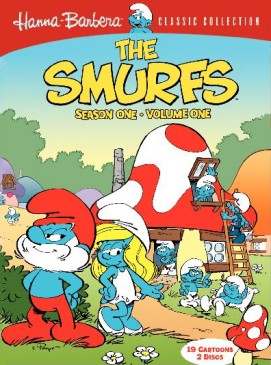 The Smurfs[1] (originally Les Schtroumpfs in French) are originally an extremely popular (and still ongoing) Belgian comic book series by cartoonist Pierre Culliford (aka Peyo) that started in the 1960s. It is more universally known for the long-running Saturday Morning Cartoon series that Hanna-Barbera created for NBC in the 1980s.

The Smurfs were born in another comic, Johan and Peewit, where they made their first appearances in October, 1958. They became so popular they got their own Spin-Off books. Starting with short comics in 1959, receiving their first album in 1963. These stories eventually overshadowed the comics that created them.

The Smurfs are tiny creatures, who looked human except for their blue skin and tails, and were constantly pursued by Gargamel, an impoverished sorcerer who plotted to steal the Smurfs so he could create gold (or eat them, he's never really been at that clear on his motivations). Papa Smurf, an alchemist in his own right, generally saved the day.

The Smurfs tended to be named according to their personality or occupation. They were all male until Gargamel created a female Smurf with black hair. After she entered the Smurfs' mushroom village, however, Papa Smurf transformed "Smurfette" into a blonde, with an appropriate change in personality. In later seasons, the Smurfs made human friends such as Johan and Peewit, and three Smurfs were irrevocably rascalized, and later created another female smurf called Sassette. (More information here.) They also have two wikis dedicated to them: Smurf wiki and then there is another smurf wiki.

Although not strictly Merchandise-Driven, the Smurfs were featured in just about every category of products intended for children: dolls, toys, clothing, comic books and even a breakfast cereal. Besides their Saturday morning series, the Smurfs appeared in a Christmas Special and other seasonal programs in prime time.

A CGI-animated Smurfs feature film was released by Sony Pictures (not Warner Bros.!) in 2011. Its page is here.

Frequent Smurfs Tropes:
The Smurfs is the Trope Namer for:
The Smurfs in both media provides examples of:
Retrieved from "https://allthetropes.org/w/index.php?title=The_Smurfs&oldid=1796254"
Categories: