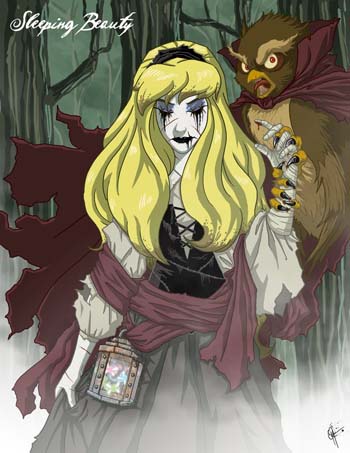 Surely not what Walt Disney intended.

I guess you think you know this story.
You don't. The real one's much more gory.
The phony one, the one you know
Was cooked up years and years ago
And made to sound all soft and sappy
Just to keep the children happy.

The act of allegedly de-bowdlerizing a story, but going to the other extreme instead: Making it Grimmdark.

It is common belief that most traditional Fairy Tales were designed to inform kids via metaphor about a potentially harsh world, in a time where children worked and traveled, and were essentially treated more like miniature adults than "kids". This is actually not the case. Original fairy tales were told to many different audiences, adults included, and the practice of softening stories for children did not yet exist. It was not until The Brothers Grimm that fairy tales began to be reworked into a style that was suitable for children as innocents. Still, even in those stories heroes could fall victims to violence and mutilation; villains were disposed of with vivid and painful executions. The harshness of these stories explains why later publishers of The Brothers Grimm's collection toned them down for popular consumption, especially in the later Victorian era, the time period when the concept of childhood truly emerged. During this time period fairy tales were once again warped and became more like the modern versions that we know today.

However, if one follows most old fairy tales back to their roots, they'll discover that they are incredibly gory. Often, these earlier elements are either rediscovered by adults or the bowdlerized version of the story is changed by other cultures that have no connection to it. As adults, we rediscover the themes that got toned down and enjoy pointing out how creepy they sound. Then it becomes popular to return a story to its non-sanitized roots or to pervert the popular Disneyfied version, unaware that earlier versions of the folk tale had included similar elements. Sometimes this includes throwing in more modern Nightmare Fuel. When done well, this can open up a completely new perspective. However it can also be done wrong, gutting a story of its nostalgia value while not adding enough to make the story appealing.

Even now the modern version of Little Red Riding Hood is very different from the first recorded version of the nursery tale, Petit Chaperon Rouge (1697) which ends with both Little Red Riding Hood and her grandmother being eaten. However, going even further back, folklorists have learned that witches were said to put on red caps and hoods before they went riding on their familiars to visit a magic circle deep in the woods and pay homage to the horned god, the Dark Woodsman. Knowing that Little Red Riding Hood was originally a tale about werewolves, it's very possible to extrapolate an entirely different meaning. Remember, these old stories might in fact be Bloodier and Gorier than Grimmified retellings.

A common example of Grimmification is having Little Red Riding Hood survive the well known version... but be scarred by the events—varying from just becoming jaded and cynical, to becoming completely psychotic.

A subtrope of Darker and Edgier. Commonly also includes Hotter and Sexier and Bloodier and Gorier. See also Fractured Fairy Tale. Not to be confused with Grimm's Law. The opposite is Disneyfication.

Technically, this trope isn't Darker and Rape-ier, but looking at the examples below you'd be forgiven for thinking this.

Calvin: Wow. The story was different that time!
Hobbes: Do you think the townsfolk will ever find Hamster Huey's head?