Did You Just Punch Out Cthulhu? 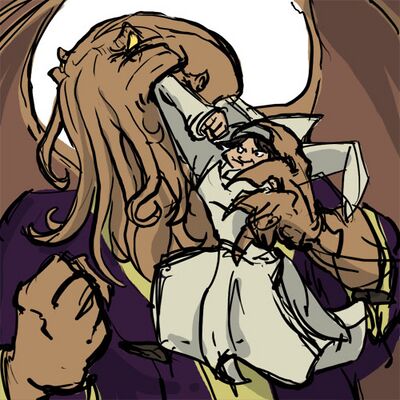 Behold, The Great Dark God Cthulhu, Almighty Master of R'lyeh, Destroyer of Worlds, Harbinger of Aeons of Madness and Despair, Inhabitant of the Terrifying Abyss, Herald of Unimaginable Infinite Horrors and Limitless Gibbering Cyclopean Chaos which Man was not meant to comprehend, (names continue on for one hundred and eight pages).... and a Flying Nun's bitch.

So, along passes the Eldritch Abomination: they who are incomprehensible, omnipotent, insanity-inducing gods; Sufficiently Advanced Aliens to which humanity is just a subatomic particle out of zillions obliterated; Cosmic Entities whose thoughts encompass the universe and infinities beyond. You know the type. Eternal, infinite, impossible to even understand, let alone oppose...

And then along come a couple of plucky heroic Badasses, who didn't get told that the Abomination is impossible to beat (and even if they were told, they wouldn't care or proclaim "Screw that!"). Through some combination of skill, brains, courage, Heroic Spirit, and occasionally raw world-shattering Pure Awesomeness, maybe some kind of incredibly circuitous strategy, maybe trap, maybe Applied Phlebotinum and/or sheer dumb luck, or hey, When All You Have Is a Hammer, they go to work and... they beat the abomination.

In short, you just killed a god. Not a Mooks, not an Elite Mooks, not The Dragon... A God! Pretty much anything much higher in Super Weight scale than the character.

This appears in quite a few videogames (especially RPGs), where the Final Boss is inevitably some kind of Ultimate Evil unleashed upon the world, or the Big Bad has ascended to godhood and gone One-Winged Angel... only to be defeated by the heroes by whittling down its health points. Particularly jarring if the horror in question is allegedly so powerful that the Precursors were only able to seal it away, or if the heroes claim it was defeated via The Power of Friendship (when it's obvious they won via the Power Of BFS, More Dakka, and Nuke-Level Summon Magic). Sometimes, you actually do kill God Himself, which is commonplace in JRPGs.

Maybe the heroes have found some rule stating that the power in question has limits or a Necessary Drawback, and then proceed to exploit it ruthlessly. Maybe Cthulhu Had The Flu. Sometimes what they defeated was just part of the being which existed in our reality at the time, in which case reducing its Hit Points to 0 just temporarily banishes it: they were Fighting a Shadow.

This is generally the result of whenever you put an Eldritch Abomination in the same room as a Superhero, or anyone or anything else capable of hitting For Massive Damage. Do not expect this trope to appear in any Cosmic Horror Story worth its salt, except perhaps as a Hope Spot.

A common Hand Wave in video games (RPGs in particular) is to have something happen that relates to the story and limits the Big Bad's power and/or brings the heroes up to its level... then pummel it with improbably large swords and nuclear-apocalypse-level magic.

For the most extreme video-game examples, where the game designers intended for a character to be indestructible and players manage to kill it anyway, see Lord British Postulate.

Compare Rage Against the Heavens, Power Creep, Power Seep, Strong as They Need to Be, New Powers as the Plot Demands, God's Hands Are Tied, Kill the God, Did You Just Flip Off Cthulhu?, Did You Just Scam Cthulhu?, Staring Down Cthulhu, Reasoning with God, Always a Bigger Fish, Defeating the Undefeatable, Summon Bigger Fish (the latter two are when it's essentially a real god, like Thor or Zeus, doing the punching out), Lovecraft Lite.

Contrast Broke Your Arm Punching Out Cthulhu, Did You Just Romance Cthulhu?, Did We Just Have Tea with Cthulhu?, Punch-Punch-Punch Uh-Oh.

Not to be confused with The Worf Effect.

Also see Do Not Taunt Cthulhu and Olympus Mons.

Examples of Did You Just Punch Out Cthulhu? are listed on these subpages: