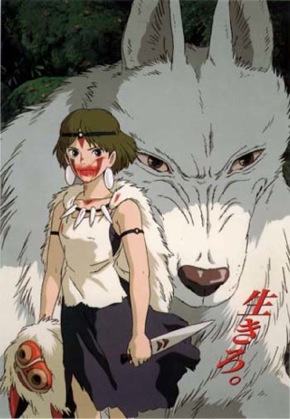 Mononoke Hime (もののけ姫) is an acclaimed 1997 film from famed Japanese director Hayao Miyazaki, with a rather dark, serious plot and ambience (compared to most of his other works), yet lacking none of the trademark stunning visuals of a Studio Ghibli production. The score was written by Joe Hisaishi. (Also worth noting that Neil Gaiman adapted the film's English dub.)

Set in Japan during roughly the 16th or 17th century, the story begins in a small village of the Emishi (similar to but not the same as the Ainu), the indigenous inhabitants of Japan, who by this time have mostly been conquered or driven into hiding in remote corners of the country where they can live in some semblance of peace. The village's peace is shattered by the attack of a terrible demon; the village's last remaining prince, Ashitaka, is injured during the fight to kill it, and even worse, the mortally wounded demon is revealed to be a powerful spirit—a giant boar that curses the Emishi with its last breath and reveals that the wound Ashitaka suffered has cursed him as well. The village elders decide, with much reluctance, that Ashitaka must leave the village before the curse takes full possession of him and travel west in search of his destiny. Ashitaka leaves immediately, with only his trusted red elk Yakul and a necklace from his sister, Kaya. The young prince follows the demon boar's trail of destruction with the only clue he has about what transformed the spirit into a demon: an iron ball found embedded in a wound on its side.

Ashitaka travels through the war-torn countryside, discovering that his curse has also imparted superhuman strength along the way. He eventually comes upon Irontown, a mining settlement on the edge of the wilderness that's in the midst of a three-way war between the strong-willed Lady Eboshi (who protects the town through the use of early firearms—hence the iron ball), the spirits/gods of the forest (who want to stop Irontown's expansion to protect their homes from destruction), and an influential Samurai warlord (who wants to seize the town for the wealth it generates). In Irontown, Ashitaka tries his best to create some peace between the various sides, cure his curse, and pursue a relationship with San, a human girl who was raised by the powerful wolf god Moro and fights alongside the forest creatures as events seem to be heading towards an inevitable disaster.

Not to be confused with the anime Mononoke.

Tropes used in Princess Mononoke include:
Retrieved from "https://allthetropes.org/w/index.php?title=Princess_Mononoke&oldid=1624465"
Categories:
Cookies help us deliver our services. By using our services, you agree to our use of cookies.