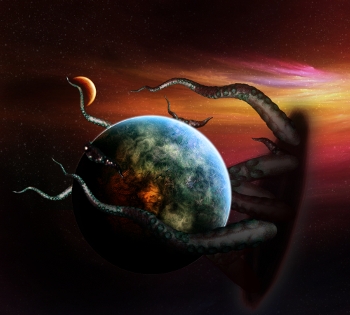 Imagine a universe where even the tiniest spot of hope for the future is blindness in itself, the insane nihilist yelling about The End of the World as We Know It in the asylum is actually the only one with a clue, and too much curiosity about the true nature of the world is a precursor to a Fate Worse Than Death. A universe where humanity is preyed everywhere by inconceivable horrors, and all our ideals are a cruel illusion; a universe which was once ruled by eldritch abominations that seeped down from the depths of space long ago.

Nor are they dead; they merely wait, and soon they shall wake. They shall return to rule this world, and all our grandest achievements shall have been in vain. For all our blind Hubris we are but mice in the wainscoting, making merry while the cat's away—but even today, the world is more dangerous than we may know.

Take one step away from the comforts of home, and you will find terror and madness on every corner—dark cults, hideous monstrosities, truths so terrible that none may comprehend them and remain sane. Demons gibber in the tunnels beneath your feet. Parasites crawl in your food, drink and stomach. Ghosts hover unseen and unheard around you. The vile essence of an alien disease lurks in the recesses of your own family tree, a genetic time bomb just waiting to go off....

Such was the vision of H.P. Lovecraft, pioneer of the Cosmic Horror Story. Our victories are hollow and our doom is certain, for we struggle not against ordinary monsters, but something else entirely. It's possible that they don't even notice our value; they're simply so unstoppable that their mere passing obliterates worlds, or worse, and we happen to be the world in question.

A Cosmic Horror Story doesn't just scare you with big, ugly monsters—though it can certainly have them—it depresses you with the fatalistic implication of being insignificantly powerless before such vast, unknowable and fundamentally alien entities. On the Sliding Scale of Idealism Versus Cynicism, it sometimes lies near the cynical Despair Event Horizon.

If you aren't sure if a work is a Cosmic Horror Story or not, ask yourself these questions:

Answering "No" to more than two of these means that the work is probably not a Cosmic Horror Story, although it may share tropes with the genre.

The genre is sometimes called "Cosmic Horror", Lovecraftian Fiction, or Weird Fiction. Very likely to use Paranoia Fuel. A Despair Event Horizon or a Downer Ending can be used to add to the depressing atmosphere. Compare/contrast with Gothic Horror (on which prose the first Cosmic Horror Stories, like those from Lovecraft himself, borrowed) Crapsack World, Mind Screw and Through the Eyes of Madness. Most Eldritch Abominations do not derive from folklore. That said, there are quite a few of them that created folklore accidentally.

Tropes associated with this genre appear on Cosmic Horror Tropes.

Note that while the Cthulhu Mythos Shared Universe originated in the Cosmic Horror fiction of H.P. Lovecraft, a Cosmic Horror Story need not refer to the Mythos or borrow from its imagery. Lovecraft Lite goes a step further than that and does not expect us to take Lovecraft's vision seriously in the first place.

Examples of Cosmic Horror Story include:

Humanity does try to do something to defeat them by creating Humongous Mecha which are actually duplicates of said abominations, but the chosen pilots are mentally ill to begin with. Various factions within the series vie for the opportunity to take down the Angels in the way they deem most appropriate, with the winner being the one that causes the most collateral damage, and the battle only makes things worse in increasingly horrifying details. There's also a conspiracy of cultists who discovered and awakened these eldritch abominations in the first place and plans to use them (especially the one whose ichor was actually the primordial origin of all life spilled in a cosmic accident never meant to happen) to bring about The End of the World as We Know It In Their Own Image. In the end, the apocalypse is so incomprehensible it even also makes us real life humans go mad from the revelation.

Retrieved from "https://allthetropes.org/w/index.php?title=Cosmic_Horror_Story&oldid=1913741"
Categories:
Cookies help us deliver our services. By using our services, you agree to our use of cookies.