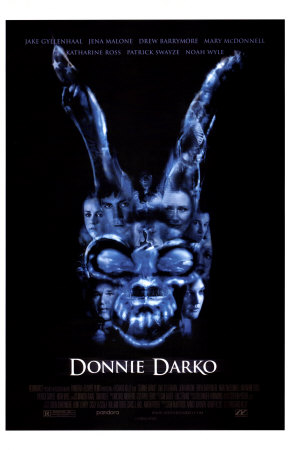 A cult Mind Screw film, set in October 1988, about a schizophrenic teenager called Donnie Darko who sees a demonic rabbit figure named "Frank" while sleepwalking. Frank tells him that the world will end in 28 days, just before a jet engine crashes into Donnie's bedroom. Donnie credits Frank with saving his life by causing him to sleepwalk out of the house, and begins to do Frank's bidding, while gradually trying to uncover the strange events around him which may or may not be related either to Time Travel, an Alternate Dimension, or Donnie's worsening Schizophrenia.

A director's cut version was constructed by the author Richard Kelly several years after the original release. It greatly alters the pacing of the movie by the addition of deleted scenes, new digital effects and soundtrack alterations. The author considers this version not a director's cut but rather an extended special edition, since the theatrical version was already his preferred cut. Fan opinions are somewhat divided as to which version is better.

Rumors of a sequel have been vehemently denied by fans for years.

Tropes used in Donnie Darko include:

Gretchen: What kind of name is 'Donnie Darko', anyways? It sounds like a superhero name.

Sean: We gotta find ourselves a Smurfette.
Ronald: Smurfette?
Sean: Yeah, not some tight-ass Middlesex chick, right? Like this cute little blonde that will get down and dirty with the guys. Like Smurfette does.
Donnie: Smurfette doesn't fuck.
Sean: That's bullshit. Smurfette fucks all the other Smurfs. Why do you think Papa Smurf made her? Because all the other Smurfs were getting too horny.
Ronald: No, no, no, not Vanity. I heard he was a homosexual.
Sean: Okay, then, you know what? She fucks them and Vanity watches. Okay?
Ronald: What about Papa Smurf? I mean, he must get in on all the action.
Sean: Yeah, what he does, he films the gang-bang, and he beats off to the tape.
Donnie: [shouts] First of all, Papa Smurf didn't create Smurfette. Gargamel did. She was sent in as Gargamel's evil spy with the intention of destroying the Smurf village. But the overwhelming goodness of the Smurf way of life transformed her. And as for the whole gang-bang scenario, it just couldn't happen. Smurfs are asexual. They don't even have... reproductive organs under those little, white pants. It's just so illogical, you know, about being a Smurf. You know, what's the point of living... if you don't have a dick?
Ronald: [pause] Dammit, Donnie. Why you gotta get all smart on us?

Donnie: Then why don't you start taking the goddamn pills, (pause) bitch?
Donnie's mom: Our son just called me a bitch.
Donnie's dad: You're not a bitch. You're bitchin'... but you are not a bitch.