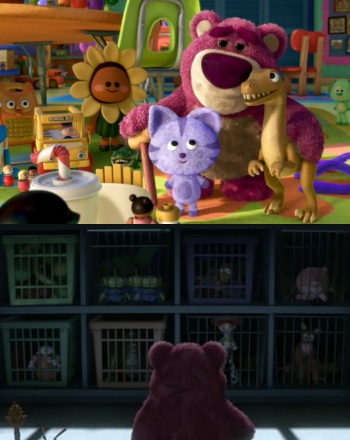 At Sunnyside, Lotso will make sure you stay forever.

A setting which, at first sight, looks nice and cute. The world is full of cheery colors, people are smiling, happy and helpful, and you're probably thinking you've just stepped into a Sugar Bowl that seriously Tastes Like Diabetes. Suddenly, you notice something wrong, and upon investigating, you realize that every single thing below the surface is horribly wrong and dysfunctional, and that behind the colorful appearance, it's really a Crapsack World.

This is basically a Stepford Smiler applied to and on the scale of an entire setting.

Compare Town with a Dark Secret, Peace and Love Incorporated, Light Is Not Good, and Stepford Suburbia. Often involves Fridge Horror, Sugar Apocalypse, Grotesque Cute, and Glurge. Contrast with Sugar Bowl, the (usually) non-ironic version of this trope. Compare and contrast Vile Villain Saccharine Show; a Crap Saccharine World is fundamentally rotten to the core, while in Vile Villain Saccharine Show, the world would become a perfectly ordinary Sugar Bowl if its horrifying villain were removed, and the similar Uncanny Village. A Type B cynical portrayal of The Promised Land that isn't a used-up and barren wasteland is likely to be one of these.

See also City in a Bottle, where Crystal Spires and Togas meets Government Conspiracy, and Soiled City on a Hill, which can be a former Shining City that retains its shiny exterior even though its heart has become corrupt and rotten. Urban Segregation can result in this if the viewer is initially shown only the utopian parts of the setting.

Contrast People's Republic of Tyranny, Fauxtivational Poster, and A World Half Full, where it looks like a Crapsack World, but it can get better. Also contrast Crapsack Only by Comparison, where an outsider thinks a place is crapsack, but objectively it isn't that bad. Happiness Is Mandatory can be this, but often fails to create even a pleasant veneer over things. This trope can be deliberately foreshadowed with an Uncanny Atmosphere

Note that this trope is about a setting. If the art style clashes with the mood of the work, that is not this trope.

No real life examples, please; again, this trope is about fictional settings.

Examples of Crap Saccharine World include:

Retrieved from "https://allthetropes.org/w/index.php?title=Crap_Saccharine_World&oldid=1908690"
Categories:
Cookies help us deliver our services. By using our services, you agree to our use of cookies.