Everything About Fiction You Never Wanted to Know.
(Redirected from What Do You Mean Its Not Symbolic)
Jump to navigation Jump to search 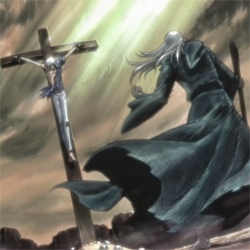 A Mahjong match... of Biblical proportions.

"If you have to ask what it symbolizes, it didn't."
—Roger Ebert

There are times when works rely a lot on symbolism, taking note of things that have occured in history, religious texts or other such things. Symbols can add a considerable amount of depth to a story, leaving the audience coming back for more to further analyze a work that they love. This also creates opportunities for the audience to see how said symbol relates to the plot or themes of the story. Several famous works have used religious symbolism successfully, garnering praise.

Because of this, less experienced creators may try and slip some symbolism into a story, when in reality the event in question has nothing to do with the symbol, in hopes that people will look at it more seriously. That is where this trope comes in: when a creator just decides to throw a historical, religious or random reference into a scene just for the heck of it. Perhaps the creator misinterpreted the message that the symbol stood for, the creator wanted their work to be taken seriously as True Art, or the creator just wanted the scene to look cool.

This is especially problematic when in addition to faux symbolism, the author throws in symbolism that is meaningful and well thought-out. If such a piece of fiction happens to become popular, this usually results in a polarized fanbase where a large amount of people either over-analyze it (try to find a meaning to both the faux symbolism and actually-meaningful-symbolism) or under-analyze it (assume that because some of the symbolism is happens to be pointless, that it's all pointless.)

Not all such references are arbitrary; this trope specifically applies only when someone has added random symbolism as an afterthought to add (illusory) depth and meaning to an otherwise-standard story. Comparing your main character to the Devil or Jesus seems popular; the latter can be easily done by giving him the initials "JC."

This technique is particularly popular in Anime, because the Japanese generally only have a passing familiarity with Christianity, and will often use names or apocrypha without regard for their actual significance. And of course the corollary being that Western productions likewise only have a passing familiarity with Eastern philosophies (for example, Karma). If Faux Symbolism is used purely in naming people or things, it's Squat's in a Name, a subtrope of this.

Be wary though that this trope can be used not to point out use of fake symbolism but to shut down discussion of what may actually be legitimate observation. When this trait is exhibited in music, it may overlap with Not Christian Rock.

Long story short, anything can be considered symbolic in the right frame of mind. There are actual academic essays and papers about the symbolism of pieces of art where none actually exists or was intended (see The Lord of the Rings and World War II), and some artists will even claim their piece has symbolism when they didn't put any actual thought into it (they may or may not actually believe it themselves). If you are at all unsure if the "symbolism" has any actual intended meaning, please try to look into it or bring it up in discussion.

Compare Crystal Dragon Jesus, Everyone Is Jesus in Purgatory, and Mundane Made Awesome.

Contrast Rule of Symbolism, when something actually is symbolic. It is also not to be confused with a symbolic Easter Egg hunt where the writer, director and production design team purposefully insert numerous small but meaningful elements, the understanding of which are not necessary to appreciate the plot, theme or character development but create fan discussion and add to rewatch value.

Examples of Faux Symbolism include:

Oda: Err... One Piece isn't THAT deep of a story, but yeah, that's where I got their names from.

Second, I did not want to create a "plotted" mind game ... When I caught myself having a plan, I subverted it.

Tom Servo: So why this symbolism? Did Christ hunt people on deserted islands?

Buffy: "Well, at least you all didn't dream about that guy with the cheese. I don't know where the hell that came from."

And ev'ry one will say / As you walk your mystic way / "If this young man expresses himself in terms too deep for me / Why, what a very singularly deep young man / this deep young man must be!"

Slick: The appeal of "Star Wars" is that it's open to different interpretations. Let's have a look at some!

Scene 8.5. Brief but pivotal. Two Pokémons[3] are grazing near a spaceship. One male, another female. They symbolize.