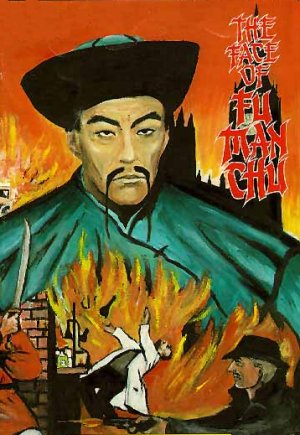 The Yellow Peril is an "oriental" criminal and/or political mastermind, a character originating in the xenophobic days of the late 19th century, but popular ever since.

As an expression of the "mysterious East" gone wrong, this villain traditionally had, or seemed to have, mystical powers. Often he had a beautiful daughter, who either turned from her evil ways to work with the good guys, or was herself a scheming villain, at least as bad as he, in her own right. Sometimes he would speak in a thick and oddly-pronounced dialect.

The "mysterious Chinaman" grew to be such an cliché in mystery stories of the early twentieth century that, in 1929 Ronald Knox, included in his "Ten Commandments" the rule that "No Chinaman must figure in the story."

In what was presumably an attempt to avert the racism inherent in this trope, several 80s and 90s Animated Adaptations of properties with Yellow Peril villains colored them green. Mandarin in the Iron Man cartoon, Dr No in James Bond Jr and Ming the Merciless in both Defenders of the Earth and the 1996 Flash Gordon series, are examples of this.

One may think this was now a Discredited Trope, but in fact it is alive and well, although the individual "yellow" villain is often replaced by Triads, Yakuza, Chinese Communism, or sinister "Asian" businessmen. The promotion of a racist meme in late 2019 added "Chinese geneticists" to that list.

The idea, in America at least, was probably spurred on by the mass-migration of many thousands of Chinese workers from China in the 1800s. This large movement led many Americans to mistakenly think of Chinese people (and by extension, all Asians) as mysterious and expansionist. The fact that the workers weren't allowed to integrate with whites and often couldn't speak English didn't help matters. It later turned out that it was Japan that was expansionist—China was in no shape for world domination at that point—but hindsight is 20/20.

Compare its polar opposite, Asian Gal with White Guy.

Examples of Yellow Peril include:

Retrieved from "https://allthetropes.org/w/index.php?title=Yellow_Peril&oldid=1900493"
Categories:
Cookies help us deliver our services. By using our services, you agree to our use of cookies.