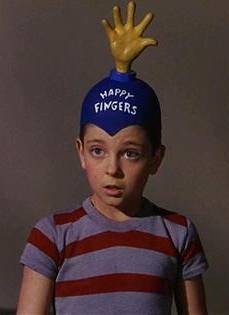 "We should always believe children. We should even believe their lies."

"How many times must Matt Groening have watched The 5000 Fingers of Dr. T?"

The 5000 Fingers of Dr. T is a sadly-overlooked 1953 fantasy movie, especially notable in that it was the only time that Dr. Seuss ventured into the live-action film medium. In it, young Bartholomew Collins (Tommy Rettig) finds himself and his hypnotized mother (Mary Healy) trapped in the piano-playing Institute of the maniacal Dr. Terwilliker (Hans Conried), a villain who doesn't just eat Seuss's marvelous scenery, but engages in an epic multicourse banquet. Bartholomew's only hope is convincing plumber August Zabladowski (Peter Lind Hayes) to help him, instead of installing the Institute's sinks.

There's Siamese-beard rollerskaters, a visit to the most toe-tappingly tuneful dungeon ever, and a very atomic noise-sucker/bomb. Go track down a copy and watch it! Do it now! (or just go here!)

This film contains these INEXPLICABLE PHENOMENA:

Oh We Are The Guards: We are Two Terrible Twins With a Terrible Siamese Beard.
Don't get fresh with us now, Or you will get choked by the beard of the twins with the
Siamese beard, with a terrible twin on each end.