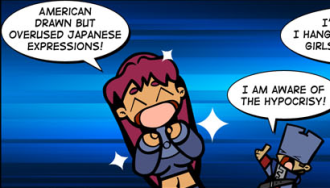 Many animated shows produced around the world could fairly comfortably be called Anime, but for the technicality of not being Japanese in origin (although a fight over whether or not they flat-out are anime is starting to erupt). These Animesque (or faux-anime) works are given different names based on the region of origin - for example, USA-created anime-influenced animation is generally termed Amerime or Americanime (which can also refer to the entire continent), and Franime is used for French examples. Most of those shows are even listed in the "Anime" section at Fanfiction.net, which is separate from said site's "Cartoons" section.

Such animation usually employs Japanese Visual Arts Tropes. Some of these are merely 'co-productions' between Japan and other countries, predominantly France and Canada. Other shows bridge the gap between 'Western Animation' styles and that of Anime, while still others, particularly that of the Saturday morning variety, simply use a form of it as an excuse to use the limited animation 'all get out' card; the plots and direction of the show are otherwise a standard Saturday Morning Cartoon.

Though most of these works are created by and primarily shown in the United States, many shows may also involve Eurasian production studios. Also, most Western Animation is technically animated by Asian studios because of cost efficiency. This is especially true of South Korean animation studios (and the occasional studio in China or Taiwan), which are used by both American and Japanese companies for these reasons. When the shows were produced and/or primarily funded by Western 'sources' but has a distinct Eastern style, then they can be called 'Animesque'.

"Amerimanga" or "original English-language manga" is also common in book-stores. Thanks to Tokyo Pop's marketing campaign and mass picking up of American manga works, the company has become synonymous with the term, although some purists tend to have a critical opinion of them if they use the more gimmicky aspects of the medium, and some of their releases don't even look particularly like "manga", just plain old black-and-white Indie comics labeled as manga.

Interestingly, this is a case of a 'full-circle' evolution as the anime style was inspired by classical American theatrical animation of the 30s and 40s (for example, the big eyes of anime characters were taken straight from Bambi, or the old Fleischer shorts, such as Betty Boop) and now Western Animation could be seen as returning the favor... or it could be seen as a continuation of the 19th-century Japonisme movement.

Western animation and comics adopted some Tropes from anime and manga, including:

Some, though, go a bit too far:

Examples of Animesque include:

Note: Most anime series are animesque pretty much by default. Please do not list them.

Several Japanese series have inverted this trope by going for a western look. Since American cartoons generally require several times the production money for their higher frame rates, there are limiting factors that keep it to surface aesthetics rather than the actual motion. The limits are easier to get around in comics and video games. If they use English, expect it to be as good as our Japanese. Also Inverted by Japanese video games in their art style and other choices.

Western styles in quick succession, including classic super heroes and The Simpsons.

Retrieved from "https://allthetropes.org/w/index.php?title=Animesque&oldid=1938461"
Categories:
Cookies help us deliver our services. By using our services, you agree to our use of cookies.