Talk to the Fist 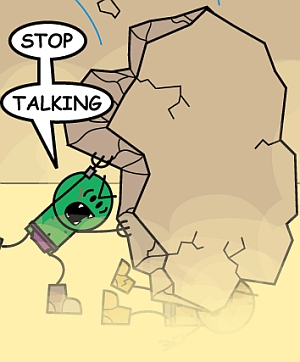 So, you've got a character who thinks fair fights are for suckers, and he's up against some idiot who won't shut up because he's trying to sound intimidating but just comes across as a cheesy actor repeating overused lines. Or perhaps he was smart enough to trick the foe into talking too much. The only thing for our savvy fighter to do in this case is-- *WHAM*

Naturally the opposite to Talking Is a Free Action; many shows where the characters call their attacks have at least one instance where this trope overrides the normal approach. Great way to deliver a Shut UP, Hannibal or show someone is Dangerously Genre Savvy. Beware if you're an Anti-Hero with a love for this who's gathered a bunch of Lawful Goodie-goodies who put Honor Before Reason, though, for they may take offense to your approach.

Compare Killed Mid-Sentence, the much more extreme version.[1] Sister trope of Dodge This. Not to be confused with Talk to the Hand.

Examples of Talk to the Fist include:

Hello, Fist! How are you?