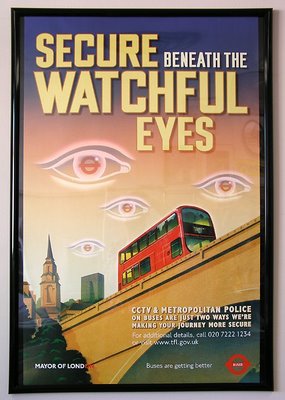 This is a real poster for a real public transportation system.

Greetings, Tropers! This is your friend, Mister Wiki, speaking to you. We all know you love All The Tropes (though some could love it better—but do not fret our beloved Trope Police are eager to enlighten our dear friends on the proper social behavior expected. Changing negative attitudes is never easy, but we are understanding.) and I have just implemented a way for All The Tropes to love you back. I call it the Pan-Optical Processing Terminal Interface/Controlling Oversight Network. This way, whenever you look at All The Tropes, All The Tropes can look at you. Doubleplusgood!

Now, Tropers, don't worry. We won't abuse this power. We'll just watch a few of the trouble makers. But nobody will know when we're watching, so we'll all have less to worry about. I know there are problems in the world, but they can all be sorted out. We have never been at war with The Other Tropes Wiki.

All dissidents will be taken to read Trope 101 and made into untropers. Don't worry, Tropers, everything is fine. Everyone is happy. Everyone is safe.

And the NSA has never tracked traffic through this wiki, either.

Happiness Through Conformity. Strength Through Editing.

Examples of Big Brother Is Watching include:

I see what you did there...

Remember: just because you finished reading the article doesn't mean we're not still watching you.

Retrieved from "https://allthetropes.org/w/index.php?title=Big_Brother_Is_Watching&oldid=1879297"
Categories:
Cookies help us deliver our services. By using our services, you agree to our use of cookies.