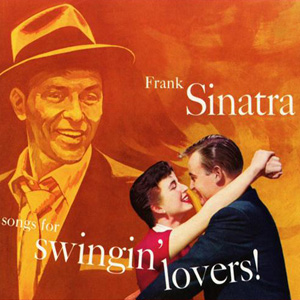 The Chairman of the Board. Ol' Blue Eyes. The Voice.

Francis Albert Sinatra (1915-1998) is one of the best known and best loved singers in the history of popular music. (And a pretty damn good actor, too.) His music and voice are some of the most recognizable in the world, and his work has been featured in numerous other media. An overview of his long and storied career would take too much space, so one should look to The Other Wiki's article on him for that. A native son of New Jersey, his hometown of Hoboken honors him with a large mural covering an entire intersection.

Interestingly, serious historians of music consider him to be the true inventor of the Concept Album, with 1955's In the Wee Small Hours (it's about men feeling lonely and isolated in, well, the wee small hours of the morning). He also won an Oscar three times (and was nominated for two more) for Best Original Song.

Also probably had strong ties to The Mafia, although it's impossible to say where the truth ends and fantasy begins.

Was decades ahead of the curve regarding race relations. In one case, he forced a hotel to desegregate by announcing that either they would allow Sammy Davis Jr. (and other black people) to stay there, or he and a number of other members of the Rat Pack would not only not stay there, they wouldn't perform there, either. The pressure applied by him and his fellow Rat Packers was instrumental in causing Las Vegas to become one of the first cities to fully desegregate.

Perhaps one of the first performers to induce loud shrills and fainting in the female population - or, at least, he seemed to.

If a trope is ever written about someone who tips big, really big, it should be called "The Sinatra". His minimum tip was $100 -- back in the Fifties, when people might take home $100 every couple of weeks[1]. Story goes, he asks the kid who brings his car around outside the restaurant what's the biggest tip he ever got. Kid says $100. Sinatra gives him $200, then asks who gave him the $100 tip. "You did, sir, last week."

Retrieved from "https://allthetropes.org/w/index.php?title=Frank_Sinatra&oldid=1950544"
Categories:
Cookies help us deliver our services. By using our services, you agree to our use of cookies.