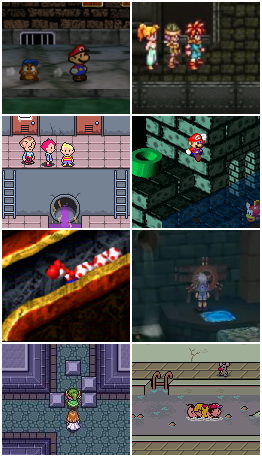 Did someone call a plumber?[1]

In real life, most modern sanitary sewers consist of pipes too small for an adult to enter. They typically range from 10 centimeters in diameter coming from individual properties, to maybe 60 to 70 centimeters (roughly two feet) in the street. Even these largest ones can at best only be crawled through, and then only if they are currently empty. Older sewer systems frequently consist of underground canals with relatively narrow walkways on the side.

Very few creatures, humans especially, would actually be able to survive in sewers for any extended length of time. It's pitch black (sewer workers bring their own lighting), very chilly even in the summer, and there's little oxygen and a plethora of noxious gases from sewage, making the air highly unsuitable for breathing (exposure to methane and hydrogen sulfide is a frequent hazard to workers).

Sewers featured in video games and any other form of fiction, however, are usually absurdly spacious underground canals with ample room to move, often enabling characters to avoid stepping into the actual sewage (often a good thing, since in many games, contact with sewer water is inherently harmful). These underground passages have more in common with the catacombs of Paris than any actual sewer system. The dim lighting, labyrinthine passages, and resident rats and alligators provide the perfectly suitable setting for heroes to chase criminals and/or monsters through. Occasionally, the place is so big people elect it as their home. It's not unusual to find whole shanty towns built in ludicrously large sewer or ex-sewer canals. And somehow there's always adequate lighting, warmth, and breathable air. Presumably, there's no bodily waste down there because Nobody Poops.

It is also often connected to a multitude of locations throughout an urban area, accessed through easily removable manholes, occasionally granting access directly into otherwise secure buildings: a perfect way for suspicious types to travel without detection (and of course, no one will be later alerted by powerful odours, either).

For an alternate route, see the Air Vent Passageway. May coincide with the much narrower Sinister Subway, and both are generally connected to the all-encompassing Dungeon Town. All but standard for The Alcatraz. Don't forget the Abandoned Maintenance Tunnels.

Real life spacious sewers do exist. See IAMA Drainer; note also that storm drainage systems, which are quite spacious, are sometimes called "sewers", thus explaining at least some versions of this trope.

Examples of Absurdly Spacious Sewers include:

Retrieved from "https://allthetropes.org/w/index.php?title=Absurdly_Spacious_Sewer&oldid=1968118"
Categories:
Cookies help us deliver our services. By using our services, you agree to our use of cookies.