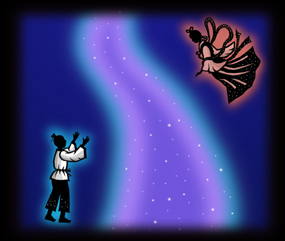 One night every year is all that they had....

Two lovers—often teenagers -- destined to be kept apart no matter how hard they struggle to be together. It may be Fate, or fatally-Feuding Families, or it may be something as mundane as a few hundred miles' separation, but something will always be in their way. Often, the two can only be Together in Death. William Shakespeare's Romeo and Juliet is the most famous example (and the Trope Namer), but the archetype dates at least as far back as Mesopotamian Mythology and Egyptian Mythology, making it Older Than Dirt.

In modern times, often the term "star-crossed" is unknowingly misused to mean lovers who are meant to be together. It means just the opposite—the stars (i.e., destiny, or the heavens) have ruled against them, or crossed their plan -- get it? Compare the word "disaster", which has the etymology "away; without" ('dis') + "star; planet" ('aster'). (Then again, if the stars rule that much, they probably did decree the love as well as the impossibility.)

One common version of this trope, Love Above One's Station (i.e., being in love with someone from a different social class), is at least discredited if not actually dead and buried in contemporary settings, but was very much true in the past, and it can still work when applied to historical settings. While it's difficult even today to have a relationship with someone from a very different background, in the old days, it was all but impossible: if you were from the lower class and courted your "better," you'd be treated with the vilest contempt and risk arrest and/or violence (possibly even death); meanwhile, a "better" who reciprocated would be disowned and possibly shut off in a nunnery, a monastery—or even an "asylum," an ironic name for a place which until a century or two ago was usually even worse than prison. (Then, see Suddenly-Suitable Suitor.)

Compare Dating Catwoman, where the relationship is forbidden but doesn't usually end tragically. Notice the overlaps with Interspecies Romance and Maligned Mixed Marriage. See also Bury Your Gays. Often the case for a Vampire-Werewolf Love Triangle. May be used as a Pretext for War.

Contrast Love Transcends Spacetime. Compare Nobody Thinks It Will Work and Uptown Girl.

Examples of Star-Crossed Lovers include:

Retrieved from "https://allthetropes.org/w/index.php?title=Star-Crossed_Lovers&oldid=1970514"
Categories:
Cookies help us deliver our services. By using our services, you agree to our use of cookies.