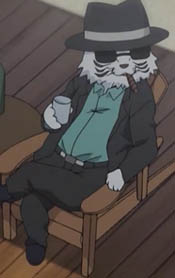 They're animals who think, talk and act mostly like human beings. Unlike the Speech-Impaired Animal or Talking Animal (whose priorities and motivations are still that of an animal despite their ability to speak), the Funny Animal has almost all the mannerisms of a human being. Sometimes, only his appearance distinguishes him from the hairless primates who draw him. Indeed, one of the main incentives in using such characters are that they are more distinctive, and hence easier to draw as recognizable individuals, than ordinary humans. Or maybe it's just because Furries Are Easier to Draw.

A good comparison, from the Scooby-Doo cartoons: Scooby-Doo is a Speech-Impaired Animal. Scrappy-Doo, who might as well be a midget in a dog suit, is a Funny Animal. (This jarring difference is one reason why Scrappy-Doo's character seems to be universally loathed.)

The main distinguishing trait of many Funny Animals is that in most situations, they can be replaced by a human and the plot would be mostly identical. Unlike Petting Zoo People, which have animal heads and tails on humanoid bodies, Funny Animals have a body that is generally shaped like that of their respective species. Funny Animals are bipedal even if their species is not naturally so, and most Funny Animal birds have Feather Fingers, whether their wings look completely like wings or look (to varying degrees) like arms. Some Funny Animals can shift between using two legs and four.

Practically any cartoon series from the Golden Age of Animation, or video games aimed at children younger than 13 have at least one such character.

Funny Animal is the technical term used by cartoonists to refer to the genre and characters. Also note that the "funny" in the title isn't literal.

Frequently overlaps with Animal Superheroes and Intelligent Gerbil. May live in a World of Funny Animals. May suffer from Carnivore Confusion and Furry Confusion. See Petting Zoo People for characters who are even more anthropomorphized, and Civilized Animal and Talking Animal for those who are less anthropomorphized.

Closely related to Beast Fable, which is the ancient form of the genre.

On the Sliding Scale of Anthropomorphism, these fall somewhere between the Civilized Animal (who still looks and acts like an animal, but lives in a Mouse World of some sort) and the Petting Zoo Person (who might as well be human).

Examples of funny animals include:

Retrieved from "https://allthetropes.org/w/index.php?title=Funny_Animal&oldid=1866761"
Categories:
Cookies help us deliver our services. By using our services, you agree to our use of cookies.