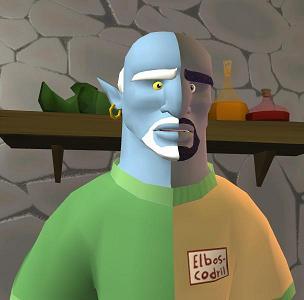 Now that's just being too literal!

Mix-and-Match Critters with a dash of human thrown in!

This is present in most unrealistic fictional genres, including Science Fiction (or, rather Space Opera), fantasy, horror, etc. In reality, many closely related Earth species share over 99% of their DNA, but cannot produce viable offspring. This makes it extremely unlikely that creatures of different planets would be able to interbreed, but then again, Mars does need women.

In fiction, human beings can conceive children with any intelligent species in existence. Demons, elves, aliens, vampires, you name it—not only will a human sleep with it, they'll engender children. The mother is in a majority of cases the human. If they are not physically viable, rest assured there are scientists somewhere who will fiddle with DNA until a hybrid is created. They'll do it if there's no reason to think the creature should have DNA in the first place. That's earth's solution for storing your genome. It requires a lot of supporting stuff in the cells, and not even everything on earth uses it. Thankfully, the Rule of Cool and Rule of Sexy let us mix it up with whatever the Green-Skinned Space Babe's ancestors evolved to store their genomes in. Good thing there are No Biochemical Barriers! And if you can't find a scientist to do it for you, you're in luck. A Wizard Did It is just as handy a Hand Wave.

Rarely does either species accept the mixed marriage, much less said hybrid, though. After all, What Measure Is a Non-Human?

If the hybrid is a positive character, it connects the audience with them, giving them familiar characteristics and a closer point-of-view into the otherwise alien culture, or else, an "outsider" character for protagonists to befriend... or at the very least, they'll have the power to fight one-half of their heritage, almost certainly if that one-half is vampire.

Positive characters also tend to pick up all the advantages and powers of their component races with no or lessened weaknesses. A Half Vampire might pick up Super Strength and Voluntary Shapeshifting without having a weakness to sunlight or a thirst for blood, for example, or a half-elf gets magic and an extended lifespan (funny, that). Being a half-breed is almost always a plus for protagonists, although the characters usually don't think so. Frequently it's because of self image issues, possibly due to people getting freaked out at them having horns and hooves or the like. Females tend to be luckier about this than males, due to being seen as an "exotic" beauty.

If the hybrid is a negative character, this will make their inhumanity more personal. They might be a Tragic Mulatto, representing what prejudice on both species' part can produce. For extra angst, the character's conception might have been less-than-consensual.

The concept as a whole, thanks to A Wizard Did It, tends to fly better in supernatural settings - when it comes to, say, demons, who can say it wouldn't work that way? It's not like we can do a DNA test on the Prince of Darkness. Yet. For those who turn into hybrids, see Animorphism and Biological Mashup. If the character was already a different non-human species, or gets hybridized a second time, they become a Hybrid Monster.

Also see Catgirl and Unusual Ears for examples of Kemonomimi, cute animal girls that are usually treated as a separate race rather than actually having an animal somewhere in their ancestry. Beast Folk are seldom so cuddly, what with the Pointy Ears, Fangs of Evil and claws. In mythology and folklore, this is known as a "liminal being", like Merlin or centaurs.

See also Interspecies Romance. A common result of a Fantastic Romance. May lead to Heinz Hybrids, if the family tree does not end with them. An inter-species halfbreed that averts the "half human" part is a Nonhuman Humanoid Hybrid. If the non-human parent is from an Exclusively Evil race, this trope may result from the human being Raised by Orcs.

Examples of Half-Human Hybrid include:

Retrieved from "https://allthetropes.org/w/index.php?title=Half-Human_Hybrid&oldid=1948846"
Categories:
Cookies help us deliver our services. By using our services, you agree to our use of cookies.