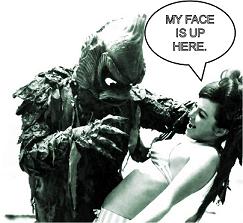 Apparently, the hottest thing in the Multiverse, above even the Cute Monster Girl, is the Human Female.

Sooner or later, no matter what the species looks like, you'll find a sample of the male that prefers human girls. It can be an alien, a swamp monster, a robot, a Non-Human Sidekick, or even a giant gorilla. (Sometimes it Was Once a Man, which makes the attraction less implausable.) Note that this is usually played straight, while the inverse is almost always played for laughs. Also, the male is far more likely to actually get the girl.

Usually the number one cause of Half-Human Hybrids. See also Beast and Beauty.

Biologically, this is completely insane. Imagine a human in the real world falling in love with a squid and you'll see why. Of course, squids don't have that kind of complexity, which may be the difference here—you can't see past their looks to their "nice personality". But Most Writers Are Male. It's more plausible with Rubber Forehead Aliens, however, since they look enough like humans and vice versa for there to be an attraction.

The fact that this trope was popularized in the fifties and sixties B-monster movies is no coincidence. Consider the racial context of the time, and this trope is a close cousin to the antiquated belief that Scary Black Men are always trying to steal white women. This would make the aliens a form of Space Jew.

A Discredited Trope in the "They're invading, and they want our women!" sense, but not in the more general "non-humanoid character attracted to a girl" sense. Very rarely, the species either culturally values the idea of human slave concubines, or is so sterile that this is the only means they have of avoiding extinction.

This is one of the reasons Aliens Are Bastards.

Named, of course, for the infamous B-Movie title. See also Touch of the Monster for how this is typically shown in a movie poster. Contrast Humans Are Ugly. Compare Face Full of Alien Wing-Wong (when the human gets pregnant), Interspecies Romance, Boldly Coming.

Not to be confused with British house act M|A|R|R|S, whose song "Pump Up The Volume" states that they need women.

No real life examples, please; at least, not until we have evidence that aliens exist.

Examples of Mars Needs Women include:

Retrieved from "https://allthetropes.org/w/index.php?title=Mars_Needs_Women&oldid=1874825"
Categories:
Cookies help us deliver our services. By using our services, you agree to our use of cookies.