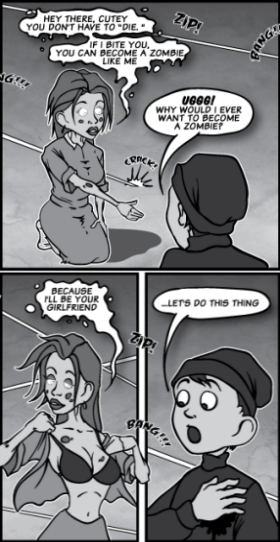 And they say romance is dead...

The Undead are usually scary, but sometimes they're sexy as well, and sometimes, a guy or a gal falls in love with one. A little bit of stalking-the-night and feasting-off-the-bodies-of-the-living is no impediment to true romance, after all. When Boy Meets Ghoul, or girl meets vampire, or, in general, when a normal person meets an attractive member of the opposite, uh, side of the border between life and death, love can flourish. They say that love conquers all. Maybe it can even conquer undeath?

This probably occurs more often with vampires or ghosts than with any other form of undead creature. Romance with actual ghouls is fairly rare, but the pun was too good for us to resist.

If the love comes first and the (un)death comes later, that's Resurrected Romance.

A subtrope of Interspecies Romance. May be a case of Mayfly-December Romance. See also: Kiss of the Vampire, Lesbian Vampire, Cute Ghost Girl, Woman in White, I Love the Dead. May invoke the Hemo-Erotic.

Contrast with Robosexual and Did You Just Romance Cthulhu?. See also Vampires Are Sex Gods.

Examples of Boy Meets Ghoul include:

Retrieved from "https://allthetropes.org/w/index.php?title=Boy_Meets_Ghoul&oldid=1944296"
Categories:
Cookies help us deliver our services. By using our services, you agree to our use of cookies.