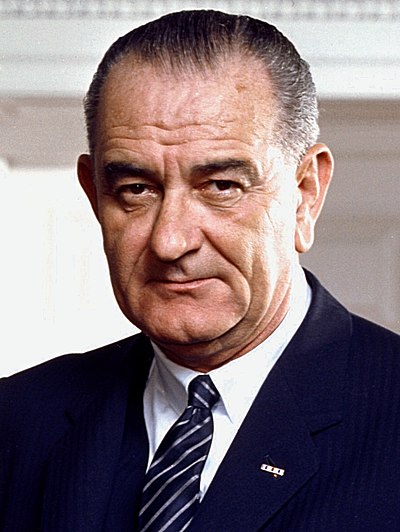 Being president is like being a jackass in a hailstorm. There's nothing to do but to stand there and take it.

President of the United States from 1963 to 1969, Lyndon Baines Johnson (aka LBJ) managed to be both incredibly good and horrendously bad.

The good was his role in the Civil Rights Laws of the 1960s, playing a bigger role than Kennedy did (as a teacher from Texas, he had seen the impact of segregation). This ended legally sanctioned racism and also altered the US political landscape, effectively removing southern whites from the New Deal coalition that had dominated US politics since 1932, and adding African-Americans. This was part of Johnson's broader ideal of "The Great Society." He also amended Social Security to create Medicare for the elderly and Medicaid for the poor; he set up the Department of Housing and Urban Development; much of the work to land on the moon was done while he was in office, though the project completed a few months into Nixon's term; massively expanded Federal money for education: and ended the system of racial quotas in immigration established since the 1920s.

He is notable as the only U.S. President to attempt to end national poverty.

The bad was the Vietnam War, along with the persistent atmosphere of political corruption that surrounded Johnson, including accusations of voter fraud, bribery, selling government secrets and (now proven by declassified documented) ordering the FBI to conduct illegal espionage on the civil rights movement and his political opponents as part of the COINTELPRO program. Critics claimed that his support for Civil Rights was belied by his Senatorial votes against anti-lynching legislation, and that his poverty programs were nothing but cynical ploys to buy votes with handouts. Lyndon's administration carried over JFK's adoption of the "Whiz Kids", a group of RAND Corporation game theorists who were responsible for mind-bendingly complex flow charts and kill quotas. The massive bureaucracies LBJ put in place to administer his grandiose social projects proved to be riddled with waste and inefficiency. His increasing unpopularity, along with his ill-health, ultimately led to his decision not to run for re-election in 1968. It appears that the actual independent effect of the war on his ratings was minimal—with his perceived mishandling of domestic issues causing more public distrust. Beyond his involvement in the war Johnson also took money from the Social Security fund to pay for the Vietnam War. Johnson nor any future Congress/PotUS put the money back like they were supposed to and indeed many haven taken further money from the fund, ensuring Social Security would eventually fail disastrously.

Johnson, a Texan by birth (unlike George W. Bush), after a brief time as a teacher, was elected to Congress in 1937. In World War Two, he asked for a combat assignment, but didn't really see much action. He did try to improve conditions for US soldiers.

On his second attempt he was elected to the US Senate in 1948. He became Senate Majority Leader and was chosen as John F. Kennedy's running mate in 1960, after earlier trying to stop JFK's nomination, in an attempt to balance the unpopularity that the liberal New Englander Kennedy inspired in the Democratic party's largely conservative Southern base. Johnson is widely regarded as one of the more effective Senate majority leaders in recent history, in no small part due to his propensity for unapologetically bullying other Senators. He was also one of only three Southern Senators (the other two being Estes Kefauver and Al Gore, Sr., both of Tennessee) not to sign the high-profile, pro-segregation Southern Manifesto in 1956. However, whether this was due to principle, politics (he was known to already be eying the White House), his role in the Senate's leadership, or some combination thereof is unclear.

Johnson became Vice-President and might well have been forgotten by history, had the events of November 22, 1963 not intervened.

The death of Kennedy meant Johnson became President, being sworn in on Air Force One, with a Roman Catholic missal as no Bible was available.

He was re-elected in 1964 in a landslide, with help from the infamous "Daisy Girl" ad, which painted his Republican opponent, Arizona senator Barry Goldwater, as a war-mongering extremist who might well start World War III. Johnson won 61% of the popular vote, which is still a record.

In 1973, Johnson died of his third heart attack, two days after he would have finished a second term.

Johnson was a colorful figure, whose rough-edged Texan demeanor contrasted strongly with Kennedy's elegant image. One incident had him exposing his appendicitis scar to the public; in another he picked up his pet beagle by the ears, assuring the onlookers, "He lahks it!" He was legendarily tough: it took him several hours to realize he was experiencing his first heart-attack. He had odd eating habits, eating quickly and, if someone near him hasn't finished eating yet, taking their food to eat, as if it was nothing out of the ordinary. He was also apparently a bit obsessed over his initials: he had LBJ on his wristcuffs, gave out pens with LBJ on them during his trips to other countries, his wife was nicknamed Lady Bird Johnson (real name Claudia, and that nickname actually predated LBJ. He proposed to her on the day they first met), named his children Lynda Bird and Luci Baines Johnson (his first daughter was born 10 years after his marriage), and his pet beagle's name was Little Beagle Johnson. Perhaps his oddest habit was conducting meetings on the toilet (Perhaps one of the best non-sexual examples of Coitus Uninterruptus). Satirical portrayals in media usually focused on playing up his Texan-ness to a comical degree.

And here, he orders pants.

Lyndon B. Johnson provides examples of the following tropes:
Johnson in fiction:
Retrieved from "https://allthetropes.org/w/index.php?title=Lyndon_B._Johnson&oldid=1895015"
Categories:
Cookies help us deliver our services. By using our services, you agree to our use of cookies.