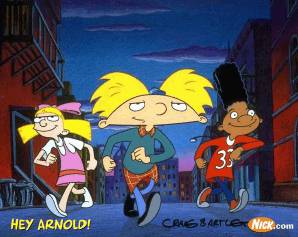 Hey Arnold! is a children's animated TV series created by Matt Groening's brother-in-law, Craig Bartlett, starring an eclectic—and more often than not eccentric—group of characters that navigate a sort of urban wonderland. Arnold is a generally mellow 4th-grader with a head shaped like an American football, who lives with his grandparents and their (also eccentric) tenants in a boarding house. Gerald is his best friend and "the Keeper of Urban Lore," who dispenses legendary tales of characters such as "Stoop Kid" (said to have been born on the stoop he can be seen, day or night, to glower from with promised vengeance to any who should think to violate his sacred site) or "Wheezin' Ed" (rumored to have a massive treasure cavern on the mysterious Elk Island). Also notable among Arnold's neighbors and classmates is Helga Pataki, a female bully who openly scoffs at Arnold's positive attitude while secretly admiring him for his optimism. As the show developed, an increasing amount of focus was put on her extremely conflicted, melodramatic character and her utter obsession with the football-headed one—she once made a shrine of his likeness, built entirely out of pieces of used gum that Arnold had chewed and left behind.

The show had a number of episodes dealing with the rather mundane aspects of childhood life, such as the crush on teacher episode, but more often ventured into the surreal, such as Arnold and Gerald encountering the labyrinthine realm of the Sewer King to retrieve Arnold's grandfather's watch, and having to duel with him to avoid being declared his "royal rat groomers." In later episodes more attention was paid to the Love Triangle between Helga, Arnold, and Lila, the sickeningly sweet country girl who likes Arnold but does not LIKE-him like him (much to Arnold's chagrin), Helga's transparently dysfunctional and unhappy family life, and the mystery of Arnold's missing parents—a story which will now never be fully told due to the show's cancellation and the aborted "Jungle Movie"... except some fans are virtually unbarred at trying to rally the masses to get the series its proper finale.

It premiered in 1996, and wound up production in 2001 (though the last episodes wouldn't be seen until around 2004). It had a movie in 2002 (although it was intended as a telefilm) titled Hey Arnold!: The Movie. Reception of the film by critics and fans of the show was very negative; after all, it was a pastiche of cliches and other sterotypes that were Played for Laughs, though one wonders how people could be so venomous about the film. Another movie had been planned, but was canceled when the telefilm was not a success. And there... we have trouble. The second movie was the impending Grand Finale of the show, now Screwed by the Network. The Jungle Movie finally was re-announced in 2015 and entered post-production in October 2017.

Currently shows on Teen Nick's The 90s Are All That programming block.

Has an excellent Wiki here.

Tropes used in Hey Arnold! include:
Retrieved from "https://allthetropes.org/w/index.php?title=Hey_Arnold!&oldid=1944060"
Categories:
Cookies help us deliver our services. By using our services, you agree to our use of cookies.