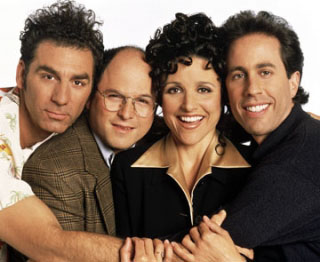 What did we just say?

Seinfeld is a show about nothing. No hugging, no learning.

Okay, seriously. One of the most popular shows of The Nineties, it mostly centered around unpleasant people doing unpleasant things to Innocent Bystanders, following Unsympathetic Comedy Protagonists Jerry, Elaine, George and Kramer. It lasted for nine years (1989 to 1998) and as many seasons, only ending when Jerry Seinfeld himself refused to go on, even after being offered 5 million dollars an episode for a tenth season.

Revolutionary for its time, as the idea of characters spending whole episodes doing and resolving basically nothing, with all humor based on the minutiae of everyday life, was unheard of in 1989 in America[1] Seinfeld was so revolutionary in America, in fact, that it was mercilessly copied. It remains very difficult to describe to the younger generation just how huge the show was in the '90s, and how memetic its plots and sayings became. To use an analogy, Seinfeld is to TV shows what The Godfather is to movies. Part of what contributed to the authenticity of the "about nothing" theme was the fact that a great deal of the plots were based on personal stories from the lives of Larry David, Jerry Seinfeld, and various members of the writing team.

Jerry Seinfeld plays a fictionalized, Jerkass version of himself as the ostensible main (though in practice arguably least interesting) character, who works mostly as a foil for his eccentric neighbor Cosmo Kramer, his best friend George Costanza, a man who can make your regular Unsympathetic Comedy Protagonist look like a winner, and his sassy ex-girlfriend Elaine Benes, who couldn't spell "tact" if her life depended on it. Jerry was the technical Only Sane Man between these colorful personalities, but a highly ineffective one because, like his friends, he is supremely indifferent towards others, opting instead for the role of Deadpan Snarker extraordinaire. This quality of Jerry's, flavored with co-creator Larry David's gift for irony, coupled with the characters' propensity for Snowball Lies and Fawlty Towers Plots is what fueled most of the elaborate yet utterly mundane plots of the episodes.

Although none of the characters worked together, lived together, or were related by blood, and even though -- or perhaps even because -- no emotional or deliberately touching moments of friendship were ever shown between them, the four remained close friends throughout the show's run, spending a great deal of their waking hours in each others' company and seemingly going by an unspoken rule to always brush off their friends' minor offenses and to never inflict any gross offenses against one another in order to preserve real-life Status Quo Is God -- one of the only social rules they bothered themselves to follow.

And then there's Jerry's other neighbor. Hello, Newman.

Seinfeld is the Trope Namer for:
Tropes used in Seinfeld include:

Retrieved from "https://allthetropes.org/w/index.php?title=Seinfeld&oldid=1762448"
Categories:
Cookies help us deliver our services. By using our services, you agree to our use of cookies.