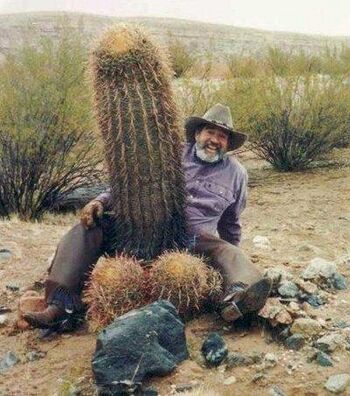 The Spear Counterpart of Gag Boobs and the very opposite of Teeny Weenie, a character with a giant penis that causes comedy. Usually much less explicit than gag boobs, as most TV shows can't actually show penises as much as just referring to so-and-so's tripod, trouser snake, garden hose etc. Though some shows are able to use visual means of implying the same point.

A gold mine of sexual entendre for shows, and usually applies to either the hero or a dumb jock-type guy.

Owing to the extreme exaggerations possible in sequential art, this is a staple of both Ecchi/Hentai Anime and Sex Comedy Web Comics.

For when giant penises improve the sex instead of improving the comedy, see Bigger Is Better in Bed. Not to be confused with a Penis Gag.

This Trope is Older Than They Think, and is in fact, Older Than Feudalism, at least. The original Greek dramas would often feature comedic actors dressed as satyrs who wore costumes with exaggerated genitalia. Which is, incidentally, where the word "satire" derived from.

Examples of Gag Penis include:

Retrieved from "https://allthetropes.org/w/index.php?title=Gag_Penis&oldid=1968060"
Categories:
Cookies help us deliver our services. By using our services, you agree to our use of cookies.